Father John Wotherspoon, right, meets a parent of a Tanzanian inmate during a trip to Tanzania in January 2015. (Photo supplied)

Oblate Father John Wotherspoon loves McDonald's restaurants, and it's not because of the fries.

The reason the Catholic priest favors the fast-food chain is that the 24-hour stores were among the few places that allowed homeless people to stay in the late evening and early morning hours. The unofficial policy even resulted in a nickname, "McSleepers," for the late-night denizens.

"God bless McDonald's for their compassion to the poor, it was the only place for these people to go," Father Wotherspoon said, noting that the restaurant chain has regularly donated meals for the homeless in Hong Kong.

But the after-hours haven of the golden arches ended abruptly about a year ago when the coronavirus pandemic tightened its grip on the city, prompting the government to order the closure of all restaurants at 6 p.m. -- recently amended to 10 p.m. -- and forcing scores of homeless onto the streets to look for places to sleep.

The city's social welfare department said there were just over 1,100 homeless people in Hong Kong in 2017. But charities and nongovernmental organizations say the actual number is much higher now in this city with a population of about 7.5 million. Pro-democracy protests in 2019 crippled the economy and jobs were jettisoned. The economy reached a nadir as the pandemic intensified with waves of new infections.

Social distancing measures designed to stem the spread of COVID-19 have continued the stagnation. With the city government struggling to reverse the economic tailspin and unwilling to provide shelter for the growing number of homeless people, a crisis was in the making, Father Wotherspoon said.

"In my opinion, this is the worst the homeless problem has ever been in Hong Kong," said Father Wotherspoon, 74, a native of Brisbane, Australia, who has been in Hong Kong for 36 years and in the Jordan neighborhood on the Kowloon side of the city for 11 years.

But it was a moment of apparent divine intervention that provided some relief.

A local report in a Cantonese-language newspaper last year about the looming homeless crisis mentioned the priest's name and resulted in an unprecedented flood of donations, Father Wotherspoon said. 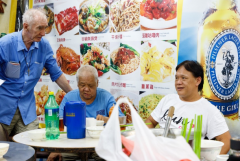 "It just multiplied from there," he said. "I never looked for money. It found me."

The funding allowed the priest and the NGO he started in 2016, MercyHK, to rent rooms in an apartment building in the adjoining neighborhood of Yau Ma Tei for those without a place to sleep. Some of the homeless work in a shop in Jordan opened last year by MercyHK; it sells secondhand goods. Those who cannot work due to age or infirmity are helped in applying for government assistance.

Father Wotherspoon said he and his NGO currently rent 40 rooms for 60 people at a cost of over HK$200,000 (US$25,700) a month in a city with the most expensive residential real estate in the world.

Soon after MercyHK found apartments for those who used to be on the street, a restaurant in the same apartment building agreed to donate free meals every Wednesday.

The rented apartments are each occupied by two or three people of the same gender and include a shower and toilet. One man who lost his cleaning job and was sleeping in the noisy airport and other places that were open late said the peace and safety of his shared apartment was a significant improvement.

"This is so much better," said 76-year-old Ah Ming, who moved into his Yau Ma Tei apartment 10 months ago. "There are no planes here."

But Father Wotherspoon said the homeless problem will get worse as the effects of the pandemic continue and the economy remains in the doldrums. There are still scores of homeless who are addicted to drugs or suffering from mental illness who are unsuitable to be placed in an apartment and thus remain on the street. They are still given food and support. The city's poorest district, Sham Shui Po, has an even worse homeless problem, he said.

"But it's never as bad as it is for these people," he said.