A medic helps an injured man during a protest in the Mong Kok district of Kowloon in Hong Kong on Oct. 27 as the city was gripped by another day of petrol bombs and tear gas. (Photo by Anthony Wallace/AFP)

Share this article :
Hong Kong’s appetite for mass demonstrations is waning, with weekend protests descending into mobs and street brawls as prominent pro-democracy advocates shifted their focus to district council elections and stepped back from calls for independence from China. One journalist was among those arrested as armor-clad police clashed with a hardcore rump of anti-government demonstrators. Train stations were again vandalized and closed early while shops and businesses were badly damaged by tear gas canisters fired by police. Some protesters wore black and ignored the ban on wearing masks, but the numbers were down and have steadily evaporated over the last month. On Oct. 27 it was just hundreds, a far cry from the hundreds of thousands who took to the streets and brought the city to a standstill almost every Sunday over the northern summer. That’s not to say the territory has lost its desire for universal suffrage or any of its anger for Beijing and its failure to live up to promises made before taking control of the enclave from Britain in 1997. The gravitas of the cause remains.
Related News 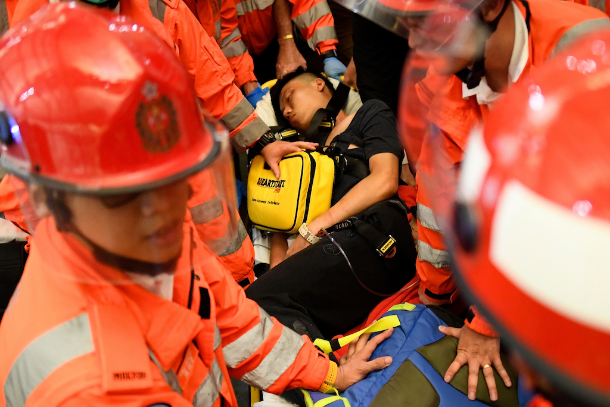 Removing the sting Despite Beijing’s lousy record on Hong Kong, there is a push among prominent moderates of the need to accept China and its “one country, two systems” policy. It’s a stance backed by high-profile activist Joshua Wong. For the first time, Wong has publicly declared he does not support independence, saying it was not an option under the constitutional framework. He made his point before election officials as part of his candidacy for the Nov. 24 district council ballot. That took some of the sting out of demands by the “leaderless movement” and was delivered as Cardinal John Tong called on Hong Kongers to emulate world leaders who advocated non-violent resistance, including India’s Mahatma Gandhi and South Africa’s Nelson Mandela. People should not feel “despair or bear hatred to anyone even though their demands are not answered, because such negative feelings can breed violence, which cannot solve any problems,” he said during a speech broadcast by Radio Television Hong Kong. It's a sensible approach with council elections on the horizon, a poll that carries democratic weight given the ruling Legislative Council (LegCo) is dominated by Beijing-approved politicians despite the domination of the pro-democracy camp in the popular vote. LegCo, the saying goes, is selected, not elected. A British comparison The current unrest is being compared with three previous riots, each one couched in politics but underpinned by poverty. The deadliest was in 1956 when Chinese nationalists squared off against the communists, leaving 59 people dead. Among the dead were the Swiss vice consul and his wife, burned alive after their taxi was targeted, tipped over, doused with petrol and set alight. Ten years later, plans by the colonial administration to raise ferry prices across the harbor spawned peaceful demonstrations that soon spiraled out of control. One person was killed and 1,800 arrested. It was a prelude to a far bigger crisis in 1967 when a labor dispute and poor standards of living lent support for the communists and anti-British sentiment, which erupted into lengthy street battles between leftists and authorities. The British response was harsh. Leftist publications were banned, schools closed and leaders arrested. In retaliation, leftists planted bombs, real and decoys, to confuse the police, while journalists who opposed their views were killed. The toll was 51 dead, 15 from bombings. An inquiry into the 1967 riots found that general insecurity and a sense of not belonging among younger people, coupled with distrust of the government, a recession, unemployment and a lack of affordable housing, had underpinned the crisis. Sound familiar? Five months of rioting and bombings only came to an end on Beijing’s orders. The tables turn The similarities between 1967 and today are striking. Housing costs and poverty rates are at a post-colonial high and now it’s Beijing’s turn to feel the nasty wrath of an upset population, particularly the youth. And just like then, those who can are migrating. Protests have lasted as long as they did back then. No estimate has been put on the damage but it is considerable. Bomb disposable squads have disarmed improvised explosive devices and say they have found caches of chemical weapons. Of the 2,800 arrests, about a third are children, with the youngest 12. Unless protesters heed calls for peaceful demonstrations, many fear deaths are simply a matter of time. The question being asked is whether Hong Kong could become China’s Northern Ireland, a land that suffered decades of bloody violence accompanied by demands for independence from Britain. That prospect has discouraged many, including the president of Polytechnic University who made headlines by refusing to shake hands with two students at a graduation ceremony because they wore masks on stage. Ten Jing-guang also urged all parties to put an end to the violence. The “leaderless movement” has left an indelible mark on Hong Kong. People have been hurt, and badly, and there have been suspicious deaths. The enclave has been lucky that no one has been killed in street clashes with police and gangs of pro-Beijing thugs. It is time for calmer heads to prevail, enabling campaigning in the council elections to pass off peacefully and allowing Hong Kongers to have their say, however limited, at the ballot box. Luke Hunt is a senior opinion writer for ucanews. The views and opinions expressed in this article are those of the author and do not necessarily reflect the official editorial position of ucanews.