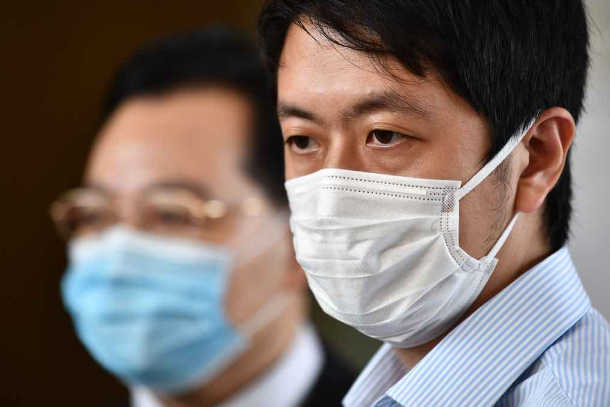 Pro-democracy lawmaker Ted Hui (right) speaks to the media outside a court in Hong Kong on Aug. 24 after the court threw out two private prosecutions, including one against a police officer who shot a pro-democracy protester last year, following a rare intervention from the financial hub's justice secretary. (Photo: AFP)

China has tightened its grip on the education system in Hong Kong, barely two months after Beijing implemented a new national security law in an effort to choke the pro-democracy movement in the territory.

Universities, students and teachers, who constitute around 40 percent of pro-democracy protesters in the former British colony, say the new moves curtail what they can teach, discuss and follow. People concerned about decreasing civic freedom in Hong Kong are already up in arms. Several groups have launched a public petition over textbook censorship introduced by the pro-China Hong Kong administration.The petition, launched by newly formed student group Education Breakthrough along with the Progressive Teachers' Alliance and Hong Kong Educators Alliance, aims to collect 10,000 signatures to put pressure on authorities to disclose the vetting criteria for liberal studies textbooks.Liberal studies, a compulsory subject for senior secondary students in Hong Kong, was introduced to foster critical thinking on contemporary issues in 2009. It has drawn flak from some pro-China experts who claimed the teaching materials were biased.The teachers and the student bodies have submitted an open letter to the secretary for education, Kevin Yeung, and urged him to remove the vetted content from textbooks. A newly set-up "professional consultancy service," which reviews the textbooks, has axed content deemed unpatriotic and championing the cause of democracy, they said.The groups also requested that the Education Bureau disclose details of the "professional consultancy service."Following the diktat from the new body, some publishers this week altered the content in textbooks about last year's city-wide pro-democracy protests.The open letter blamed the authorities for hindering students' independent thinking and stifling free thought. "They are turning the textbooks into the authorities' mouthpiece," the letter noted.Activist Isaac Cheng, spokesperson for Education Breakthrough, told the media: "We hope students will consider using older versions of textbooks that are more comprehensive and clearer, and boycott the revised version."

In an Aug. 20 statement, UK-based NGO Hong Kong Watch pointed out that content related to the infamous Tiananmen Square massacre has been deleted from liberal studies textbooks.Chairman Benedict Rogers slammed this "deeply disturbing development," claiming it would puut an end to academic freedom in Hong Kong.Radio Free Asia quoted students and teachers as saying that the new measures are aimed at "brainwashing" students into unquestioning patriotism and inculcating loyalty to the ruling Chinese Communist Party (CCP). They cited multiple examples of wording that reflects the official line from China. Hong Kong security chief John Lee had earlier pledged to "deal with the schools" in a stern manner as he claimed that around 40 percent of pro-democracy protesters were students and more than 100 were teachers.CCP mouthpiece People's Daily and state news agency Xinhua have defended the vetting scheme, saying it is aimed at cleansing "the toxic teaching materials."The new security law that came into effect in the China-administered city on June 30 primarily aims to check the pro-democracy movement. It stipulates severe penalties for those advocating independence, liberation and revolution in public.

Stephen Chan, a Catholic who teaches in a church-run school, said he was worried about the prospects of China controlling the education system even before the national security law was introduced.Chan, who teaches liberal studies, said there will be "more constraints and considerations" now when setting examination papers and selecting materials to teach.Chan, who also teaches Bible subjects, said he foresees problems in teaching the Bible and he would have to find newer ways to communicate the Bible's teachings to his students.Chang said truth and justice are the core values of Catholic education and teachers are committed to these values. He said Catholic schools function under Hong Kong Diocese's directions, while the official Church's approach to these issues will also have an impact on the teaching system."As a teacher, I have a sense of mission and I want to do my best to help students understand the truth and know how to distinguish between right and wrong," Chan said.