Chief Executive Carrie Lam made the announcement, but did not outline what the new crimes would be 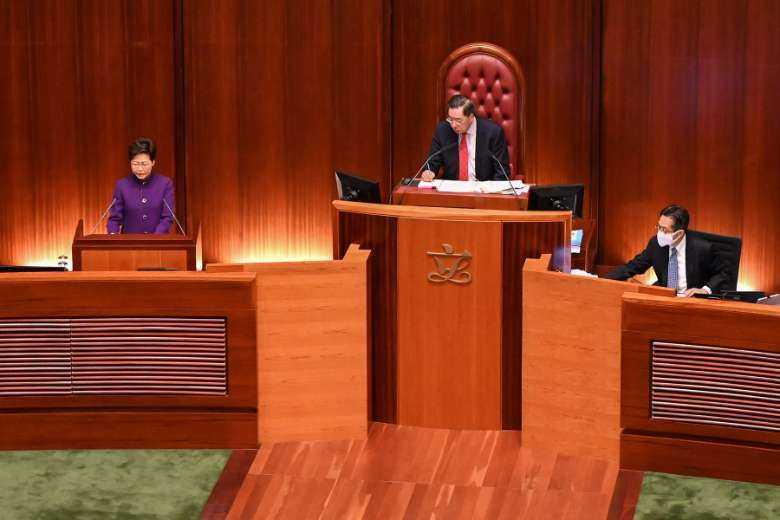 Hong Kong's Chief Executive Carrie Lam (L) speaks to the Legislative Council (LegCo) members as the president of LegCo, Andrew Leung (C), looks on during the first session of a new "patriots only" legislature in Hong Kong on January 12, 2022. (Photo: AFP)

Hong Kong will create a host of new national security crimes, the city's leader said Wednesday, as she presided over the first session of a new "patriots only" legislature scrubbed of political opposition.

The legislation will add to a sweeping national security law imposed directly on Hong Kong by Beijing that has transformed the international finance hub and empowered authorities to carry out a widespread crackdown on dissent.

The current national security law defines four crimes -- secession, subversion, terrorism and colluding with foreign forces -- and offenders can face up to life in prison.

But on Wednesday, Chief Executive Carrie Lam confirmed that her government would create new "local legislation" that meets Article 23 of Hong Kong's mini-constitution, which calls for the city to pass its own national security laws.

"Article 23 legislative work is part of Hong Kong's constitutional duty and cannot be further delayed," Lam told lawmakers, adding that the government aimed to publish a draft by June.

Lam did not outline what the new crimes would be.

But the specific offences Article 23 lists are treason, secession, sedition, subversion and theft of state secrets.

China imposed its own security law after huge and sometimes violent democracy protests swept Hong Kong in 2019, saying it was needed to restore order and would only affect a "tiny minority".

It has begun transforming Hong Kong into a mirror of the authoritarian mainland, criminalising much dissent, setting new legal precedents and sparking sanctions by Western governments who argue it has trashed the city's freedoms and autonomy.

It also empowered China's mainland security apparatus to operate openly in the city, and allows the government to freeze the assets of any company or individual deemed to be a national security threat.

Most of Hong Kong's best-known democracy activists are in jail, have quit politics or have fled overseas.

In 2003, an attempt by Hong Kong's government to pass its own national security law sparked large protests and was eventually aborted -- which is why Beijing imposed a law directly on the city in 2020.

It is unlikely the city government will face much opposition in passing the new law.

Under new "patriots only" political rules also imposed by Beijing, the city's legislature has been cleared of any opposition.

All lawmakers are now vetted for political loyalty before standing, and only 20 seats are directly elected. Just one of the 90 vetted legislators who were selected in polls last month describes himself as "non-establishment".

A small committee of Beijing loyalists will choose Hong Kong's next leader in March, and Lam has not yet said whether she will stand for a second term.

Her first term ends in June.

On Wednesday, Lam said it would be difficult for the new national security bill to be completed by the end of her first term, meaning the legislation will probably fall to her successor.

"Its function now is to act as an anchor to guarantee stability, to let people know there are consequences," she told lawmakers, adding the new legislation would be similarly "well written".

"The law requires us to prevent, curb and punish crimes. If prevention is done well, we can punish less."