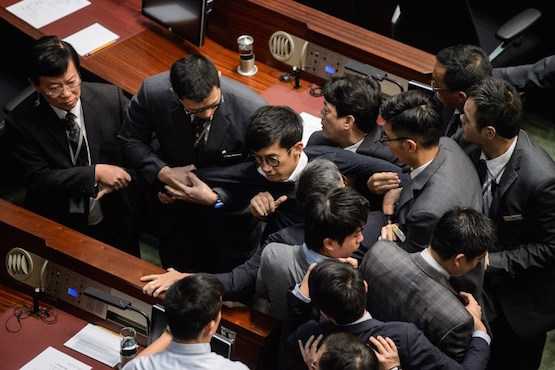 Newly elected lawmaker Baggio Leung (center) is restrained by security after attempting to read out his Legislative Council oath at Legco in Hong Kong on Nov. 2. (Photo by AFP)

China's government ramped up its interference over semi-autonomous Hong Kong after it passed an interpretation of the city's mini-constitution on Nov. 7 that would seek to bar two pro-democracy lawmakers from their positions.

The law in which Beijing interpreted relates to Article 104 of Hong Kong's Basic Law, which states that lawmakers must swear allegiance to China when they take their oaths.

Two young, pro-democracy lawmakers did not have their oaths accepted when they refused to accede to this demand.

Last month, lawmakers Yau Wai-ching and Sixtus "Baggio" Leung refused to swear allegiance to China during their oaths. Yau also said the word "Shina" during her oath, which could be interpreted a racial slur. Both lawmakers also brandished a flag that read, "Hong Kong is not China."

In response pro-establishment lawmakers have attempted to physically bar the two from the chambers of the legislature.

Beijing's ruling to ban the two young lawmakers is being seen as its most direct intervention in Hong Kong's legal system since the 1997 handover.

Human rights experts and lawyers alike have hotly contested the interpretation because it has bypassed a decision from the city's courts, undermining the power of an independent judiciary.

"The [Chinese government's] decision is unprecedented because this is the first time it's issued an interpretation of Hong Kong's constitution while a court case is ongoing — thus, Beijing is directly interfering in a court case," said Maya Wang, a China researcher with Human Rights Watch.

"The interpretation causes lasting damage to a judicial system that prizes its independence, which forms the bedrock for the many remaining freedoms guaranteed in Hong Kong. The decision raises fears that Hong Kong's promised autonomy, and its freedoms, are under attack," she said.

The night before Beijing's interpretation of the law, protests erupted in the Sai Ying Pun neighborhood — where the China Liaison office is located — and the scene was nostalgic of the Occupy Central movement in 2014. Yellow umbrellas flared open against riot police carrying shields and standard-issue rifles, while pepper spray was deployed into the crowd.

The interpretation of the Basic Law comes at an especially volatile time, when the city's so-called "umbrella soldiers" — the young icons of democracy who spearheaded Occupy Central — made it into the legislature after the city's landmark September elections.

Yau and Leung — who ran under the Youngspiration party, which came to light after Occupy Central — have called for Hong Kong's total independence from China. Beijing takes an especially hardline against Hong Kong's independence advocates and refers to them as radicals and separatists.

Some experienced observers see the move as presaging a stepped up campaign by Beijing to interfere in Hong Kong's elections.

"This is not an interpretation, but an act of imposition. The original article in the Basic Law only said the oath should be done ‘in accordance with law' … and I don't think this is the original intent of the law," Paul Ng, the Chairman of the Justice and Peace Commission of the Hong Kong Diocese, told ucanews.com.

Ng, who's also a professor at the City University of Hong Kong, said that this excessive power could destroy the institution of free legislative elections in Hong Kong.

"The judgment is very subjective and would mean the supervisor holds the power to let you in [to the legislature] or not. A lawmaker is meant to be elected by the people," Ng said.

Stephen Siu, a Catholic university student who joined the demonstration on Nov. 6, said that having to pledge allegiance to Beijing is imposed political censorship on Hong Kong's political servants. Now, he said, the interpretation of the law is even more censorship — and gives excess power to those supervising the oaths.

He also said that the government in Beijing might impose more laws and regulations that could potentially violate the civil rights enshrined in Hong Kong's Basic Law.

"[Interpretation] is destroying the democratic institutions of Hong Kong. The government can remove the rights of anyone who is not loyal to the regime in the eyes of China," he said.

Britain handed over Hong Kong back to China in 1997, but with the understanding that the city would have 50 years of political freedom. The Basic Law ensures separation of powers in the government. The move from Beijing to interpret the law — supported by Hong Kong's chief executive Leung Chun-ying — is seen as a deeply diminishing power play subverting the city's constitutional rights.

For Beijing, the interpretation of the law "safeguards the authority of the Basic Law and the rule of law in Hong Kong" and "complies with the common aspiration of the entire Chinese people, including the compatriots in Hong Kong," according to state-run media Xinhua.

This was not the first time an oath in the chambers of the legislature was flubbed — chief executive Leung, who called on Beijing for the interpretation of the law, made a mistake in his own oath when he forgot to say the words "Hong Kong" back in 2012.

Chief executive Leung has said that he will ensure Beijing's interpretation of the law will be upheld.