The important mission for Hong Kong is to pass on the truth about the massacre, says Cardinal Zen 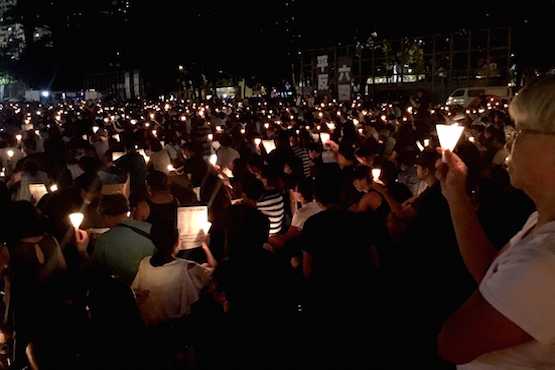 The candlelight vigil in Hong Kong's Victoria Park June 4 that commemorated the 1989 Tiananmen Square protests and massacre. Over 125,000 people attended this year's vigil. (Photo by ucanews.com)

Hong Kong commemorated the 27th anniversary of the Tiananmen Square Massacre with the city's traditional candlelight vigil while student groups advocating "localism" avoided such commemorations saying they are pointless.

Catholics were among the more than 125,000 people who joined the vigil at Victoria Park to remember pro-democracy protestors killed by the Chinese military in Beijing and other Chinese cities on June 4 1989.

The vigil was boycotted by 11 student unions who instead held two forums on the future of autonomy for Hong Kong which were attended by an estimated 2,500 people.

Sin Wai-keung, a Hong Kong photojournalist who witnessed the violent suppression of protestors in Beijing, said the Hong Kong student's stance was misdirected.

"There's no need to link up the June 4 commemoration with Hong Kong's democratic development," said Sin.

Jonathan Chan Ching-wa, a former student leader who was also in the Chinese capital on June 4 said remembering the peaceful nature of the protests is important.

"Commemorating June 4 publicly is to show the truth to people all over the world and it challenges the validity of a Chinese government ruled by the Communist Party," said Chan, who is a Christian. At the end of a prayer service, Cardinal Zen blesses those who were to attend the candlelight vigil at Hong Kong's Victoria Park. (Photo by ucanews.com)

But Althea Suen Hiu-nam, president of the University of Hong Kong's student union said that: "The commemoration should come to an end as it did not help any progress for Hong Kong democratic development."

Ng Kwai-lung, head of Shue Yan University's student union editorial board attacked the Hong Kong Alliance in Support of Patriotic Democratic Movements of China, who organized the vigil, calling them "pimps and bawds of a brothel."

The student unions anti-commemoration stance has been widely criticized.

Speaking at a June 4 memorial Mass, Bishop Ha said Catholics should not slight the power of remembrance.

"See how [the Communist Party] are afraid of June 4 every year," Bishop Ha said in reference to China's ruling party which has attempted to hide the history of the June 4 crackdown in mainland China. A Hong Kong Catholic offers a candle at a Mass commemorating the 27th anniversary of the Tiananmen Square protests and massacre. (Photo by ucanews.com)

Speaking at another memorial Mass before the commemorations took place, Cardinal Joseph Zen Ze-kiun said the church in Hong Kong has done a lot to educate the youth about what occurred 27-years ago.

"The important mission for Hong Kong is to pass on the truth," said retired bishop of Hong Kong.

Jeremy Wong, a Catholic student at the Chinese University of Hong Kong, said he has felt despondent by not seeing any progress for democracy in Hong Kong but he does not agree with student leaders criticizing the commemoration of the Tiananmen Square Massacre.

"June 4 is about humanity. You can do your own thing but having compassion for those who died for democracy is much more than a formality," said Wong.

"When I show the pictures to my students and tell them what happened 27 years ago, most of them are shocked. They are like a blank paper before the lesson," Siu said.

Watch this ucanews.com video for more visuals on the June 4 commemorations in Hong Kong.