Hong Kong should 'not lose hope' in fight for democracy

Use forms that are peaceful, non-radical, non-violent and full of charity to fight for social justice, says Cardinal Zen 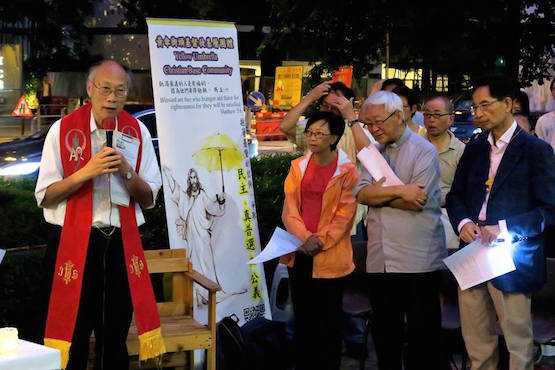 Hong Kong's outspoken retired Cardinal Joseph Zen Ze-kiun has used an outdoor Mass that commemorated the second anniversary of the pro-democracy Umbrella Movement to urge people to continue to press for social justice in a city increasingly under the heavy hand of Beijing.

A participant in the weeks of sometime violent street protests in 2014, Cardinal Zen's message was that the people of Hong Kong should not lose hope in their fight for democracy.

"We can see that many people campaigned for seats in the [Legislative Council] elections and voted. It shows that the movement has had an effect," Cardinal Zen, 83, said referring to six young candidates advocating for independence or self-determination who were recently elected as lawmakers.

"Do not be disappointed. Let us insist on using methods that are peaceful, non-radical, non-violent and full of charity to fight for social justice," he said.

He urged Catholics during Mass not to forget that the Umbrella Movement's goal was to fight for a better social system that cares for human rights.

The Mass, attended by some 100 people, was held on the street in the Admiralty region of Hong Kong island near government house on Sept. 28. It was organized by the Yellow Umbrella Christian Base Community and Hong Kong Diocese's Justice and Peace Commission.

Ahead of the Mass, Cardinal Zen joined about 1,000 people — many holding yellow umbrellas — who gathered to commemorate the Umbrella Movement's second anniversary, out the front of the Hong Kong government headquarters.

In 2014, Hong Kong protesters used umbrellas to protect themselves from tear gas canisters fired by police causing the world's media to dub them as the Umbrella Movement. The term is now used interchangeably with Occupy Central, a civil disobedience protest for democracy and universal suffrage as the mainland ruling Communist Party continues to tighten its grip on the famously freewheeling city. At the peak of the protest more than 150,000 people had taken to the streets.

Martin Lee Chu-Ming, the Catholic founder of the Democratic Party of Hong Kong, told people after Mass that the effects of the movement were beginning to show.

"In my 22-years of political engagement, I have never seen people who do not have any political experience get in to the Legislative Council," he said.

He said the election of the six young people — all of whom participated in the Umbrella Movement — was a "miracle!"