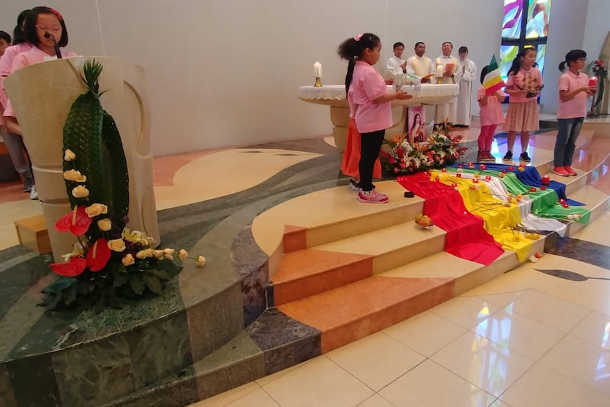 Members of the Missionary Childhood Association pray at Mass for peace in Hong Kong and around the world. (Photo supplied)

In response to Pope Francis’ creation of Extraordinary Missionary Month, churches in Hong Kong have set up the first chapter of a Missionary Childhood Association, with 20 children pledging to assist in missionary work after receiving formation.

The first chapter was established in St. Jerome’s Church, Tin Shui Wai district, with children aged 5-14. On the feast day of St. Therese of Lisieux, Oct. 1, they were blessed and commissioned by their priest.

The parish’s pastoral Sister Sophia Rani said the project had been a response to Pope Francis' invitation given two years ago, which prepared the universal Church to celebrate the 100th anniversary of Pope Benedict XV’s apostolic letter, Maximum Illud.

The nun of the Missionary Sisters of the Immaculate, popularly known as the PIME Sisters, came to Hong Kong in 2012. Sister Sophia realized that children were very busy with their studies and had little time to reflect on their daily lives. She also noted that that many of them could not properly express their needs.

She told ucanews.com that after receiving faith formation, the children were expected to first influence their own family, especially their parents who were not yet baptized. The children were thus able to make faith a value they could share with those close to them.

“With so much social unrest nowadays, this value becomes something they can hold on to,” she added.

Baptized in Easter this year, Icy Chan said she hoped her children would become “a person who cares about the world.”

Allowing her 5-year-old son to join the association, she encouraged him to learn more about the needs of other children living in other countries. In that way he would understand how blessed he is to live a comparatively ample life in Hong Kong.

She told ucanews.com that her son’s young age was not a hindrance and further that she believed children have their own ways of doing things. She said her son had formed a habit of saying a prayer before meals, even when she is not around.

Frances Lee, a first-batch member of the association, told ucanews.com that she wanted to share with her fellow children the love of God and peace so that many more will get to know Him.

The 8-year-old said she often wore the uniform, smiled when greeting people and stopped classmates from quarrelling.

Her mother Amelia Cheng was one of the four “animators” but adopted the slogan “Children helping children” — the pontifical association had made children the focal point of the exercise, she pointed out, and animators were just there to provide assistance when needed.

As a parent, she hoped that the members would not assume a position of being “the strong ones helping the weak.” They were there to instead share their faith, she added. “All missions should be rooted in the love of Jesus Christ,” she explained.

The Missionary Childhood Association was founded by Bishop Charles August Forbin-Janson of Nancy, France, in 1843. One of its initial projects was to respond to the material needs of the Church in China.

As an encouragement to the association, Pope Pius XI granted it a pontifical title in 1922. Together with three other missionary associations, the Missionary Childhood Association forms part of the Pontifical Mission Societies.