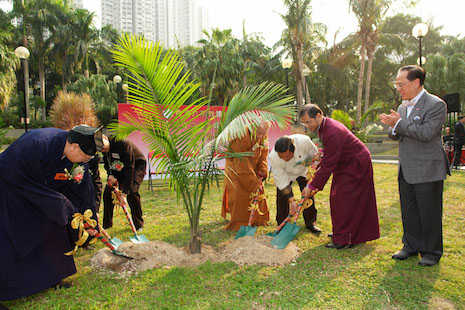 Hong Kong’s six main religions have joined forces to urge world governments to come to a consensus on tackling climate change, among the first interfaith organizations in Asia to do so.

“Act now — time is running out,” they said. “Currently, we are on the trajectory of emissions with potentially catastrophic consequences — threatening all of us and the natural world.”

The statement calls on governments to come to a worldwide consensus on reducing emissions when United Nations climate talks resume in Paris at the end of the year.

Although countries including the US and China have reached bilateral deals to reduce emissions, at the UN level nations continue to disagree: many less-developed nations argue they should not be held to stringent emissions limits when they haven’t had a chance to develop their economies.

“The religious leaders are concerned about climate change and environmental protection. That is the spirit of all religions and we do hope an agreement could be reached in the climate talks in Paris later this year,” said Chan Kim-kwong of the Christian Council.

The statement by Hong Kong’s main interfaith group represents a landmark as it is “probably the first” of its kind in Asia, said Ciara Shannon, Asia regional coordinator of Our Voices, a worldwide multi-faith climate movement.

“It is important that faith leaders raise awareness on the moral imperative of climate change, globally and in Asia, and our shared responsibility to act,” she added.

The statement from Hong Kong comes as Pope Francis prepares to publish an encyclical on ecology and climate change which is also expected to urge world leaders to reach a binding emissions agreement at the next round of talks.