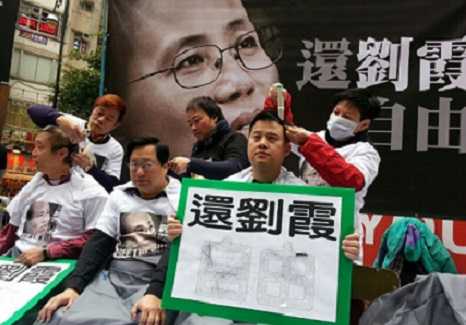 A small group of activist on Friday shaved their heads in a public act of solidarity with the wife of imprisoned activist and Nobel Laureate Liu Xiaobo.

Nine protesters gathered in Hong Kong's Times Square in Causeway Bay to shave their heads, aiming to send the message that “authoritarianism is bound to be condemned by all people of conscience”, according to the group.

The Liu Xia Concern Group, named after the wife of Liu Xiaobo and comprising members of local and international NGOs, said in a statement that as a large part of the world celebrates St Valentine’s Day, many husbands and wives in China remain apart because of their efforts to fight for human rights.

Liu Xiaobo is currently serving an 11-year sentence for subversion.

“It is even more absurd to see spouses and family members of dissidents being put under heavy surveillance, deprived of their freedoms and rights by the authorities,” the group’s statement said.

“Liu Xia has been one of those suffering the most severe monitoring,” the statement added.

Liu Xia is currently under house arrest and is reported suffering from poor health – a situation made worse, her supporters say, because her brother was also imprisoned last year.

In the Chinese language the words “hair” and “law” have the same pronunciation, and the act of shaving hair is meant to symbolize lawlessness.

The group posted images of their shorn heads on social media platforms and called for the immediate release of Liu Xiaobo and all political prisoners, as well as freedom from surveillance of family members of detainees.

“The action is not just for those who are persecuted in mainland China. Who knows if one day people in Hong Kong may face the same fate under a country that disregards the rule of law,” said Or Yan-yan, a member of the Liu Xia Concern Group.

“That is why we need democracy.”