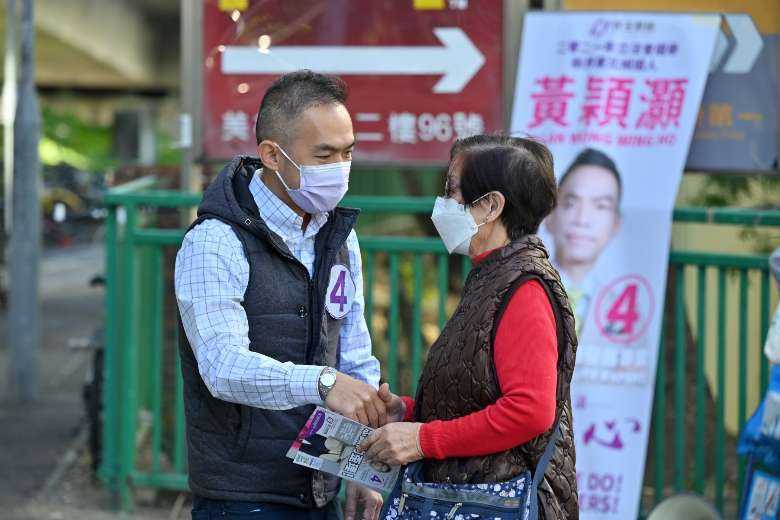 Allan Wong (left) speaks to a woman as he campaigns on a street in Hong Kong on Dec. 8 ahead of the city's legislative elections on Dec. 19. (Photo: AFP)

Against a backdrop of colourful banners and fluttering flags, Hong Kong politician Allan Wong is trying to get morning commuters excited about the city's upcoming "patriots only" legislature polls.

Wong, 41, is one of 153 people vetted for their political loyalty and allowed to stand in a new system that has drastically curtailed who can run for office.

Polling data suggests turnout for the Dec. 19 Legislative Council election could hit record lows. But Wong is undeterred. On a housing estate in his constituency, he tries to engage residents with conversation and leaflets. Some stop to chat, most walk on.

"I need to go to the street, introduce myself, get in touch with voters and the public and do the best I can to explain what I want to do," he told AFP.

It's not an easy sell. In the quiet neighbourhood of Tai Wai, constituents tend to project ennui.

A middle-aged couple told AFP they had no plans to vote this year but declined to say why because such discussion was "too sensitive."

A young man, who gave his surname as Pang, said in the last local polls he voted for a pro-democracy candidate who is now in self-imposed exile overseas.

Pang called this year's vote "pointless" because even those who want to distance themselves from the establishment must still play by Beijing's rules.

Hong Kong has never been a full democracy. But until recently, a vocal minority of Beijing critics was tolerated, something that made previous local elections periods of colourful and at times rambunctious debate.

Now the pro-democracy opposition has been demolished under a Beijing-imposed national security law that has criminalized much dissent, combined with new political rules designed to purge "anti-China" elements.

Under the new system, just 20 of the city's 90 legislature seats are directly elected — down from half. The rest are chosen by reliably pro-Beijing committees. One of those committees is made up of 1,500 people — 0.02 percent of Hong Kong's population — and will pick 40 seats.

Additionally, all aspiring candidates now have to be vetted and only those deemed sufficiently patriotic can stand for office.

Traditional opposition figures, including many elected pro-democracy lawmakers, have been jailed, disqualified or have fled overseas.

The result is a comparatively uniform candidate slate jostling for an even smaller piece of the legislative pie this year.

Wong is about as close as you can get to a non-establishment politician within this new system. Campaigning on local constituency issues with a smattering of environmentalism, he identifies as neither pro-democracy nor pro-Beijing.

Instead he sees himself as a "third way" candidate, though he concedes that is a tricky pitch in a city where residents have tended to vote for pro-democracy figures when they are given a chance.

He is also realistic about the new legislature being dominated by loyalists. "Even if [non-establishment candidates] all win seats in the Legislative Council, we are just the minority, like 10 seats or even less," he said.

Chinese officials argue their new system will bring Hong Kong back on the right track after the massive and often violent pro-democracy protests that engulfed the city two years ago.

Officials also say the new system will also ensure the legislature — a previously boisterous debating chamber — will no longer be bogged down by the minority opposition filibustering.

The more these officials would like to blow their own trumpet, the more people would see what they say as little more than state propaganda

"The more these officials would like to blow their own trumpet, the more people would see what they say as little more than state propaganda," he told AFP.

Chan pointed to polling numbers from the Hong Kong Public Opinion Research Institute, which showed only around 51 percent of respondents planned to vote — a record low.

For previous legislature elections between 2004 and 2016, that figure consistently hovered above 80 percent.

Nearly half of the respondents this time said they found no candidates worth supporting.

A previous survey by the same institute found respondents struggling to identify candidates and an examination by the South China Morning Post found one in six candidates has not even published a manifesto.

Chan described the upcoming race as "heavily manipulated from start to finish." He added: "We are in a very different game, a game that Hong Kong people are not comfortable with."