Young people in Hong Kong on June 4, 2021 marking the anniversary of the Tiananmen Square massacre happened 32 years ago in mainland China. (Photo: AFP)

A Hong Kong park that traditionally hosts huge vigils on the anniversary of China's deadly Tiananmen Square crackdown lay empty for the first time late Friday as police blocked access, but flashes of defiance still flickered across the city.

Huge crowds have routinely gathered in Hong Kong's Victoria Park to mark the anniversary of Chinese troops crushing peaceful democracy protests in Beijing's Tiananmen Square on June 4, 1989.Hundreds were killed in the crackdown, by some estimates more than 1,000.
Subscribe to your daily free newsletter from UCA News
Thank you. You are now signed up to Daily newsletter
Public commemorations are forbidden on the mainland and, until recently, semi-autonomous Hong Kong was the one place in China where large-scale remembrance was still tolerated.This year's vigil was banned at a time when authorities are carrying out a sweeping clampdown on dissent following huge and often violent democracy protests two years ago.Police threw cordons around Victoria Park, keeping crowds out and leaving the venue free of candle-carrying mourners for the first time in 32 years.Activists who approached the park were stopped and searched, while officers used loud hailers and signs to call for people to disperse from nearby streets.Some officers displayed signs warning chanting crowds that they were in breach of a sweeping new national security law Beijing imposed on the city last year to stamp out dissent.Candles and MassesUnable to muster en masse, many Hong Kong residents still found other ways to mourn the dead.
Related News 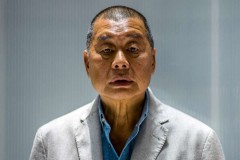 At 8pm (1200 GMT) -- the time when candles are traditionally lit -- some residents shone mobile phone torches in the districts of Causeway Bay and Mongkok according to AFP reporters at the scene.Others produced candles and lit them where they stood.Some attended memorials at churches across the city that said they would open their doors to mourners.

Catholic Churches in the city offer memorial mass for those who died in Tiananmen Square. This year too some churches conducted prayers adhering to the government's Covid-19 restrictions.

"I used to commemorate June 4 at Victoria Park but this year it is not safe to go to there," a 35-year-old office worker who gave her name as Beth, told AFP outside a Catholic church in Sai Wan Ho district."I am not Catholic, I usually never attend mass or go to church. I just want to be part of this special occasion and commemorate it because I think it is important," she added.Some 7,000 officers were placed on standby to prevent any show of pro-democracy people power on Friday's sensitive anniversary and authorities warned they would adopt a zero-tolerance approach.In the morning, four plainclothes police officers detained Chow Hang-tung, a prominent member of the Hong Kong Alliance that organises the annual vigil.Police said she and a 20-year-old male had been arrested on suspicion of publicising an unlawful assembly through social media posts."Their online remarks involved advertising and calling on others to participate or attend banned public activities," senior superintendent Law Kwok-hoi told reporters.Virus or politicsAuthorities banned this year's gathering citing the coronavirus pandemic -- although Hong Kong has not recorded an untraceable local transmission in more than a month.Last year's vigil was also denied permission because of the pandemic, but thousands defied the ban and rallied inside the park anyway.Authorities have warned in recent days that the subversion clause of a powerful new security law imposed on Hong Kong could be used against those marking the Tiananmen anniversary.Beijing imposed the law a few weeks after last year's Tiananmen rally and it has transformed the city's once freewheeling political landscape.More than 100 pro-democracy figures have been arrested under the law, mostly for political views and speech. Most are denied bail and face up to life in prison if convicted.Pro-Beijing politicians have suggested that calls to "End one party rule" and "Bring democracy to China" -- both common chants at Tiananmen vigils -- could now be deemed subversion, one of the crimes in the broadly worded national security law.The security legislation has also been combined with a campaign dubbed "Patriots rule Hong Kong" aimed at purging from public office anyone perceived to be disloyal.In mainland China, the Tiananmen anniversary is usually marked with an increase in online censorship and the square in Beijing being cordoned off.There was tight security at the square on Friday, with police checking the IDs of people at each point of access, according to an AFP journalist in Beijing.China often faces international criticism for its campaign to stifle remembrance of the crackdown.On Friday, United States Secretary of State Antony Blinken called for "a full accounting of all those killed, detained, or missing".China responded to the US criticism by saying Washington should "look in the mirror" over its own human rights record.