Chow Hang-tung speaks at a press conference at the June 4th Museum in Hong Kong on Sept 5. (Photo: AFP)

A Hong Kong judge today ordered a group of democracy activists to accept bail after they declared they would rather remain in pre-trial detention than be released with limits on their speech.

The unusual ruling illustrates how the judges are curbing speech — even for those who have not been convicted — and how arrested activists are trying to push back in the courts.

For the small number that are released, strict limitations are often imposed by judges such as curbs to their movement and whether they can give interviews or post on social media.

This week five activists from Hong Kong Alliance — a group that used to host Hong Kong's annual Tiananmen vigils — appeared in court for a new bail hearing where they criticized these curbs.

"If I am made to choose between physical liberty and freedom of expression, I will choose the latter," Chow Hang-tung, a trained lawyer and one of the defendants, told the court.

Under a totalitarian regime, the law is a bloodless but violent tool for the regime to control its people, and the court is not a place of justice

Two of the activists, Simon Leung and Chan To-wai, made no request to be released.

But magistrate Peter Law ordered them to be bailed anyway, saying it was their responsibility to adhere to limitations set by the court.

Chow will stay in detention as she faces a separate national security charge. It was not clear whether the other four activists would agree to being released.

Under the security law, bail has become hard to secure because defendants must prove they no longer pose a danger to the country if temporarily released. 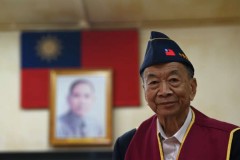 In normal criminal court cases in Hong Kong, the onus is on the prosecution to persuade a judge why bail should be revoked.

More than 150 people have been arrested under the security law including former lawmakers, politicians, journalists and students.

Some of those detained have remained vocal, passing along their messages to colleagues or friends for publication on social media platforms such as Facebook and Patreon.

On Oct. 19, a democracy protester who was jailed for nearly five years on rioting charges read out a letter condemning the courts that quickly went viral.

"Under a totalitarian regime, the law is a bloodless but violent tool for the regime to control its people, and the court is not a place of justice," she said.