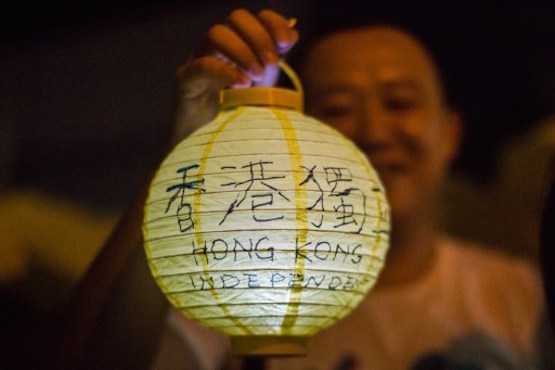 A pro-democracy activist holds a yellow lantern while attending a protest march towards government offices in Hong Kong on Sept. 26, 2015. (Photo by AFP)

Hong Kong high schools have become the latest battlefield between pro-independence "localists" and the government with at least 17 schools — five of which are Catholic — forming groups advocating independence from the mainland.

Studentlocalism, a pro-independence movement, is making headway in local schools by encouraging students to form activist groups and use their student unions to advocate for independence from Beijing whose rule is widely resented in the special administrative zone.

The administrator of a localism Facebook page for students of St. Joseph's Anglo-Chinese School said they wanted to spread the message, rouse their classmates and encourage debate on the issue.

"Hong Kong students should be concerned about the destiny of their city," said the administrator who does not want to be named. "Independence relates to every student. Why can't we discuss it? The school is a place for us to share knowledge. We have freedom of speech."

The administrator claimed that he and other members of the group are current students of the diocesan school and they are in league with Studentlocalism. However, the school administration said "they may just be graduates."

"Our teachers have checked the Facebook page and have asked the students directly," said Poon Wing-keung, principal of St. Joseph's.

"Until now, none of the teacher's reports show that the group is run by current students," said Poon.

"We cannot intervene on things done by graduates outside the school," he continued. "But we certainly don't tolerant these kind of groups on campus."

The principal conceded that Hong Kong independence could be discussed in school academically but a "concern group" would be too political and therefore inappropriate for an education institute.

Eddie Ng, the Education Secretary of Hong Kong, said that students should discuss the sensitive issue under the supervision of teachers and within the limits of Basic Law, which stipulates Hong Kong is a part of China and that teachers should maintain this stance. Beijing education officials supported Ng's position when they met on Aug. 18.

The Education Bureau has also warned that if teachers advocate for Hong Kong independence in school, their teaching licenses maybe canceled.

Dominic Chu Fu-yau, the Assistant of the Episcopal Delegate for the Education of Hong Kong Diocese, admits the topic is unavoidable in liberal studies classes.

The syllabus includes social issues in Hong Kong, Chu explained. "Independent ideology exists in reality [and] if students want to know, teachers have to talk about it."

However, Chu emphasized that teachers should not allow any political bias to creep into their teaching of the touchy subject.

Karen Siu, a Catholic teacher, disclosed that a job applicant was asked her opinion on the matter during an interview for a teaching post.

"I don't know if her answer would affect her chances of potential employment," she said. "But this is the first time I have heard of that question being asked of job candidates."

Siu thinks that educators should be careful what kind of organizations are approaching students.

"Schools should study these organizations well," she said. "If we do not understand them, how can we explain them to the students?"