The Vatican has appointed a 61-year-old Jesuit as the new bishop of Hong Kong after delaying the appointment for more than two years because of diplomatic sensibilities over China’s communist regime.

Father Stephen Chow Sau-yan was appointed on May 17 to succeed Bishop Michael Yeung Ming-cheung, who died on Jan. 3, 2019, leaving the diocese vacant.

“The appointment is a moment of gratitude for the Catholic Church in Hong Kong as it has been prayerfully awaiting the shepherd who will accompany the faithful in these times of socio-political polarization in the city,” the diocese said while announcing the news on its website.

Cardinal John Tong Hon, 82, has been leading the diocese as its apostolic administrator, although he retired as bishop when Bishop Yeung was appointed in 2017.

The Vatican overlooked Hong Kong’s Auxiliary Bishop Joseph Ha Chi-shing for the post after he openly criticized Beijing and supported the pro-democracy movement in the city that began in 2019.

Observers say the Vatican delayed the appointment in order to find a candidate acceptable to the Chinese communist regime that has tightened its control over Hong Kong’s administration since last year.

Bishop-elect Chow was the Jesuit provincial superior of the Chinese Province at the time of his appointment.

Bishop Ha, a Franciscan, is seen as unacceptable to Beijing as he often appeared at prayer vigils and at protest gatherings saying that “no matter how long” the protesters stayed, he would stay with them.

Beijing’s approval of the Hong Kong bishop is also seen as essential after the Vatican and China inked an agreement on the appointment of bishops in China in an effort to stop the state from appointing bishops without the Vatican’s mandate.

Although Hong Kong enjoys autonomy as a special administrative region, China treats the city as part of its territory for all practical purposes, especially after Hong Kong’s national security law was enacted in June 2020. 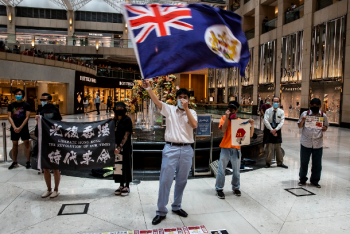 “Father Chow is a good choice for the diocese. He has strong faith and strong leadership skills,” said a local Catholic who has known the Jesuit for a few decades.

“His experience with education will boost the Catholics’ confidence in Catholic education.”

After completing his doctorate in education in the US, Father Chow took up the leadership of Wah Yan College in Hong Kong in 2007.

Father Chow has headed the Education Commission of the China Province since 2009.

“Educating the youth not to become champions but to become responsible citizens has been the priority of the Jesuit education mission,” the diocesan site said while introducing Father Chow.

Since 2012, Father Chow has also served at Holy Spirit Seminary as a part-time lecturer in psychology. He also served as a member of the Diocesan Priests’ Council from 2012 to 2014.

“Reconciliation and unity are much needed in the Catholic Church in Hong Kong and unity is most important for the diocese at the moment,” a Catholic woman told UCA News, indicating the division among clergy and laity.

While some Hong Kong Catholics adamantly oppose having any links with the communist regime, others seek a compromise to practice their faith without being communist victims, another Catholic woman said.

“It is definitely a wise decision of the Vatican and will probably help the local Church move forward with a more united spirit,” said the woman, who identified herself only as Theresa.