Penalties for sedition, secession, terrorism and interference are raised from 10 years to life in prison 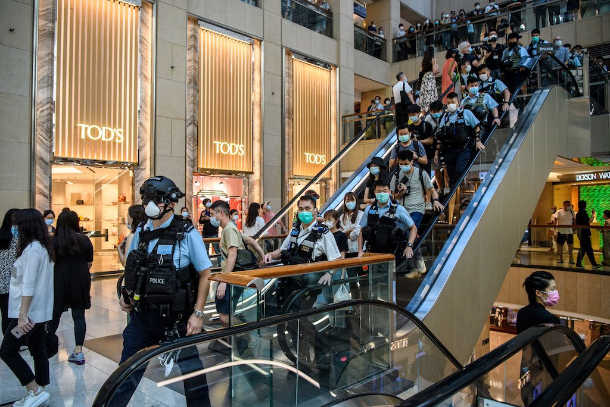 Police enter a shopping mall to disperse people attending a lunchtime rally in Hong Kong on June 30 as China passed a sweeping national security law for the city. Critics and many Western governments fear the law will smother the finance hub's freedoms and hollow out its autonomy. (Photo: AFP)

The new law will give Beijing the power over security matters in the city state, effectively breaking open the “one country, two systems” framework that was supposed to run until 2047, posing a threat to freedoms in the city.

The law, expected to be enforced from July 1, is set to affect universities, schools, the media and many other aspects of Hong Kong life.

The Peace and Justice Commission of Hong Kong Diocese is so concerned about the new law that it joined with 85 other human rights and social justice groups in an open letter demanding that the law not be passed.

Now Catholic activists including senior clergy like Cardinal Joseph Zen and Bishop Joseph Ha could be charged for participating in street protests that Beijing has labeled as “terrorist” and therefore could fall under the law.

“We can also openly preach and hold religious ceremonies. And participate in religious activities,” Tong said.

“The participation of the Church in social affairs should also not be affected,” he said, adding that “that the Hong Kong SAR government does not interfere in the internal affairs of religious organizations and provides services to the general public.”

In typical Chinese Communist Party style, the law was rushed through the Standing Committee of the National People’s Congress today on the eve of the 23rd anniversary of the handover of Hong Kong with secrecy and no public scrutiny.

The law was first proposed only five weeks ago and the final details were yet to be released at the time of publication. It was passed unanimously by the standing committee’s 162 members within 15 minutes of the meeting starting at 9am.

In a last-minute change, penalties for sedition, secession, terrorism and interference were raised from 10 years to life in prison. The legislation also gives Chinese authorities the power to try people in the mainland’s opaque and brutal legal system that allows for almost endless detention without trial and can halt access to legal representation.

Only a handful of Hong Kong’s top representatives to Beijing legislative and advisory bodies were given access to the full detail of the law and even Hong Kong’s chief executive Carrie Lam admitted less than a week ago that she had not seen the final bill.

Under the law, Beijing-controlled security infrastructure will be installed in the city that is at first expected to target political activists behind the pro-democracy protests that began in June 2019. Many activists have recently been arrested.

Ironically, Lam was due to speak to the United National Human Rights Commission today in Geneva. An experts’ statement ahead of the meeting warned that the new law would violate China’s international legal obligations, interfere with the rights and autonomy of the Hong Kong people, and place human rights defenders at risk.

The US has also passed legislation downgrading the position of Hong Kong amid a general outcry form democratic nations about the new law.

But the Vatican was not among them, maintaining its silence as it renegotiates its deal with Beijing on the appointment of bishops that is due for renewal or expiry in September, with observers claiming this was the reason the security law had Cardinal Tong’s support.