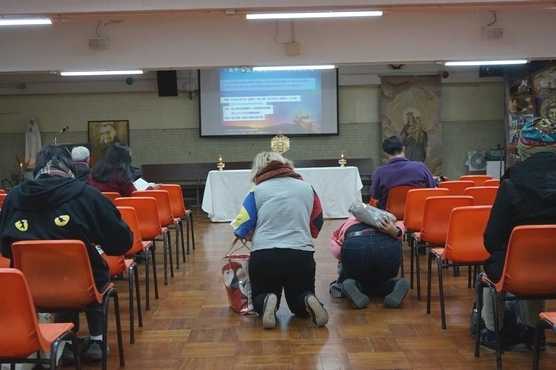 People who joined an all-night vigil held by the Justice and Peace Commission of Hong Kong Diocese have expressed hope that the Holy See will make a more careful decision on the proposed Sino-Vatican agreement on bishops' appointments.

The 12-hour vigil with the theme "Dedication to God for the Church in China" started at 8pm on Feb. 13 at St. Bonaventure Church in Kowloon.

Or Yan Yan, a project officer at the Justice and Peace Commission, told ucanews.com that many Hong Kong Catholics are worried about the China Church at this crucial moment and wanted to pray for it, so they held the vigil to express their concerns.

Or, who has been observing China for many years, is not optimistic about the current situation of the China Church and said that under the tightening grip of President Xi Jinping with the newly revised regulations for religious affairs, controls on religion would become much more severe.

She hoped the Sino-Vatican agreement could be in line with the practice of a civilized and free society instead of a distorted way to facilitate the control of Chinese authorities.

Or said bishop appointments should be decided by the pope. "The church knows best the criteria for choosing a bishop, which needs stringent investigations and consultations, so the way by which the universal church appoints a bishop is most appropriate," she said.

Or noted that the church did not need to deal with China in the same way as countries concerned about secular interests, so it could still tell the truth and uphold morality and righteousness.

"If the church, which has no burden of secular interests, also has to perceive what China is thinking, it is quite deplorable," she added.

The vigil included a Eucharistic adoration, reciting the rosary, night and morning prayers and a Mass.

Mr. Wong, a Hong Kong Catholic, told ucanews.com that he came back from England for Chinese New Year and joined the vigil with his wife because he was very concerned the Sino-Vatican agreement would hurt his Chinese brothers and sisters. He hoped their prayers would let the Holy See carefully reconsider the agreement.

Another attendee, Miss Lam, claimed not to have any preferences on the agreement but believed that Westerners might not understand China thoroughly, so it would be better for the Vatican to consult bishops and priests in Asia to solicit opinions before making any further decisions.

Mr. Wu, another Hong Kong Catholic, told ucanews.com that the underground church in China being sacrificed — as has been claimed by opponents of the deal — was not consistent with the spirit of the church.

"From the perspective of human nature, it is totally unacceptable that they have been suffering for so many years and ultimately abandoned. And then now, it is done by the church. How would non-believers view us?" he said.

Vatican officials have said the church is not being abandoned and they are simply trying to bring the two arms of the China Church together under bishops approved by Rome, a system that has de facto existed under previous popes, as even Cardinal Zen has admitted.

Mr. Wu cited the deal that saw the UK hand back Hong Kong to China in 1997 as an example of how things can go wrong.

"The Sino-British Joint Declaration states that Hong Kong remains unchanged for 50 years, but actually she has been changed beyond recognition in less than 20 years. Superficial interests are only deceitful indeed and gain cannot compensate loss."

Father Chan told ucanews.com that signing an agreement or establishing diplomatic relations between the Vatican and China does not involve doctrinal affirmation but was a diplomatic act by the Holy See.

He said that so-called wisdom or unscrupulous diplomatic acts had figured in the Vatican's history. "But no matter what decision will be made, we, as the universal church, should respect the Holy See's final decision," he added.

Father Chan stressed that even though the decision of the Holy See referred to pastoral needs, the fact that underground bishops were disappearing did not mean the China Church would be united, nor would superficial unification show more blessedness.

"The Protestant Church still thrives under the Chinese government's pressure, so the current scene should not be attributed to the reason that evangelization is at a standstill," the priest said.