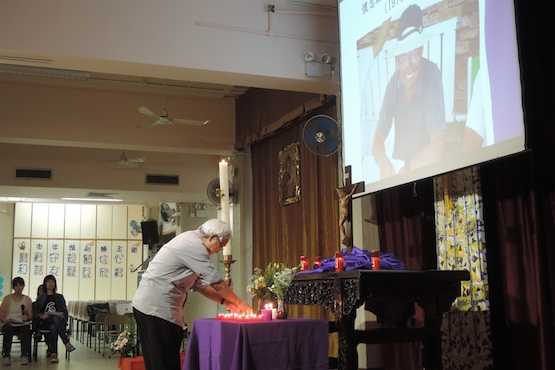 At a May 7 prayer service in Hong Kong, Catholics prayed for answers to the mysterious death of an underground priest in mainland China last November.

Father Pedro Yu Heping, also known as Wei Heping, was found dead Nov. 8 in the Fen River, a tributary of the Yellow River that flows through Shanxi province.

His family disputed the official cause of death, which was ruled a suicide. Officials in China have refused to release Father Yu’s body until his family signs documents accepting the suicide ruling.

Cardinal Joseph Zen Ze-kiun, retired bishop of Hong Kong, told 70 Catholics gathered for the prayer service that Father Yu’s family continues to suffer. "Half a year has gone already. They could not hold a proper ceremony to pay tribute to the priest," he said.

"The authorities claimed Father Yu had committed suicide. If his family does not sign the official documents, agreeing on the conclusion, they cannot get back his body," the cardinal said.

Cardinal Zen questioned why police would not open an investigation as ever-present surveillance cameras in China may have captured Father Yu’s final moments.

"Authorities refuse to reveal the truth because they are hiding something," said Or Yan-yan, project officer of the Hong Kong Diocese's justice and peace commission, which sponsored the May 7 prayer service.

"Father Yu's abnormal death has many unanswered questions. We pray for him with the intention of finding truth and justice," she said.

Tianzhujiao Zaixian, a popular Catholic portal co-founded by Father Yu, also called for special prayers for Father Yu and his family for May 11, six months after the date police informed his family of his death.

"Father Yu's family suffered pressures and gossip as they insist to probe the priest's death," a notice posted May 5 on the website read, "but they determined firmly that no truth, no burial."

At the May 7 prayer service, the commission distributed a booklet with articles written by Father Yu and included tributes from his family, priests, nuns and laypeople who knew him.

A family member of Father Yu wrote that she burst into tears when she saw his body, covered by a white cloth, before being sent for an autopsy last November.

"I deeply felt that he was so much like Jesus unloaded from the Cross. I thought how a simple life he had lived, and the same when he died," the family member wrote.

"How could such a good priest left us like this. I pray for him and also for the religious policy, which gets tightened each day in China," Kwan Hon-wa, a prayer service particpant, told ucanews.com.