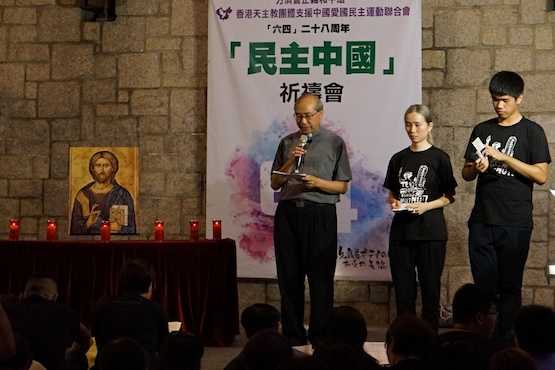 Hundreds of Catholics joined a prayer vigil in Hong Kong remembering the 28th anniversary of the Tiananmen Square Massacre, even as the Chinese government blocked any mention of June 4 on the internet.

About 900 people attended the vigil at the city's Victoria Park an hour and a half before the more secular event was attended by tens of thousands in Hong Kong but was boycotted by "localism" student groups who say it is an irrelevant event.

Auxiliary Bishop Joseph Ha Chi-shing of Hong Kong, who led the prayer service, said people are asking about the meaning of commemorating the crackdown on the pro-democracy movement given that there is no development of democratic processes in China. His response Bishop Ha said was to remind them that it is about Christian values.

"What we insist and are looking for is not from the view of democracy and freedom but from God," said the bishop.

"We will figure out that justice and peace which a society should have are already in the love of God," he said. "Only when we exercise this love can have a chance to fight for democracy and freedom."

And hour and a half after the prayer vigil, the traditional candlelight vigil was attended by 110,000 people. Media reports say that this is the lowest number since 2008 of people remembering the massacre of untold numbers of peaceful pro-democracy demonstrators in China around June 4, 1989 by the Chinese military.

The events around June 4 remain highly sensitive for China's ruling communists who suppress information regarding it and prohibits open discussion about what occurred on the mainland.

Hong Kong remains the only Chinese city where such a public event is allowed as China’s "one country, two systems" policy gives the territory limited democratic decision-making powers, rights to religious belief and freedom of assembly.

The International Federation of Journalists said social media users across China found access to WeChat, a social media platform, limited and almost impossible to use on June 4.

"Throughout the day, internet users also found that any content or headlines that referenced the anniversary were quickly deleted," said the federation in a media release.

"The authorities said that the content was taken offline as it 'violated the relevant laws' without reference the exact laws." A young girl with her parents attends the June 4 commemorative candlelight vigil at Victoria Park in Hong Kong. (ucanews.com photo)

Or Yan-yan, one of the organizers of the prayer service, believes Catholics continue to support the prayer service — which has maintained, or even increased, attendance — because Christians insist on universal values through their faith.

Her comments follow some criticism of the main commemoration by Hong Kong Chinese University Student Union that put out a statement arguing such commemorations are pointless.

"Besides criticizing the form of commemorations, they [the students] are also losing hope on fighting to seek an official reassessment of June 4 while not seeing a result for so many years," said Or who is the officer of the Justice and Peace Commission of Hong Kong Diocese.

"But the Christians have hope, a virtue. They are not afraid to wait for the will of God," she said.

Eric Lai, a former Catholic student leader, regarded the student union's statement as just representative of a point of view on how effective the main event is and held a forum instead.

"They are not denying June 4 but they are using other forms to commemorate it. It is progressive in another sense," Lai told ucanews.com.

Reverend Chu Yiu-ming, a standing committee member the alliance, does not want to comment on the student union statement, but he told ucanews.com that he felt sad about it.

Chu said commemorating what occurred on June 4, 1989 is about condemning an unjust event where innocent people were killed at Tiananmen Square.