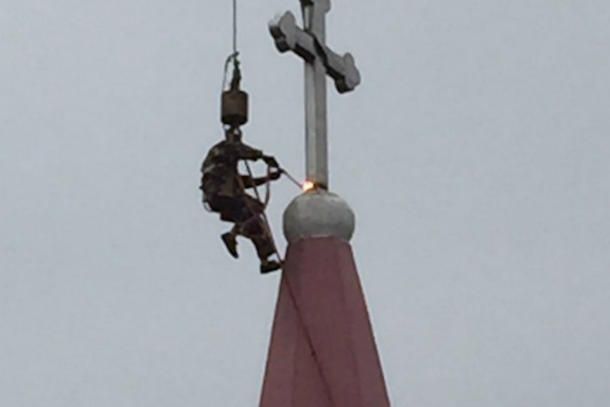 The cross of Lingkun St. Michael Church of Yongqiang Parish in Wenzhou is taken off its steeple after orders from China's communist authorities in December 2018. (Photo supplied)

It’s a strange quirk of history that the Diocese of Hong Kong is part of the Archdiocese of Guangzhou. That technically gives the archbishop of a diocese in the People’s Republic of China control over the diocese of the special administrative region where different legal rules apply.

The Chinese Catholic Patriotic Association (CCPA) that controls Catholicism in China — both official and underground after the 2018 deal between Beijing and the Vatican on bishop appointments — does not operate in Hong Kong. The same is true of the Diocese of Macau in that special administrative region.

The overriding fear of Hong Kong Catholics is that, as Beijing insists on stronger control over the city with its new security laws, it may try to bring the Church in line with its controls.

They rightly fear that Beijing may decide to insert the CCPA between the diocese and the Holy See. The CCPA and the Vatican still recognize different governance areas for the Church — diocese and parishes — and the alignment of these is surely among the discussions between Rome and Beijing for going forward with the next phase of their agreement due for renewal in September.

Hong Kong and Macau are surely sticking points, and the latest moves by Beijing are now too significant to be ignored by Vatican diplomats.

It’s hard to see Beijing looking too fondly on the Hong Kong Church’s tradition of fighting for freedom and more democracy. This is understandable as prior to 1997 the Church was governed by Great Britain, the home of democracy.

Like all Hong Kongers, Catholics in the city tend to value their freedom, although it’s worth noting that some would accept greater control by Beijing as inevitable. That includes the freedom to worship as they want, not with the tight restrictions in mainland China which now exclude those under 18.

The mainland also tightly controls the sale of religious materials including the Bible as well as controlling and restricting activities outside churches. Church charities may come under pressure.

Many Hong Kong Catholics have been involved in pro-democracy protests, but under the new laws they will be treated far more harshly. Beijing has shown little compunction in detaining and arresting clerics, which may spell trouble for activist Cardinal Joseph Zen and Auxiliary Bishop Joseph Ha. 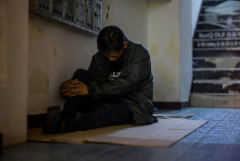 In short, a tough line by Beijing could upend the Church in Hong Kong. The problems get even more pointed when we look at the personalities involved.

In early 2020, Chinese leader Xi Jinping departed from long-established practice and installed men in charge of Beijing's main Hong Kong-focused units who had no experience in the territory. Both men are very senior cadres who have held top jobs in major provinces and it goes without saying that they are Xi loyalists.

Such senior appointments have effectively ended the fiction that Hong Kong’s government has any real say over the territory’s direction. The introduction of new security laws by Beijing this week will give them sweeping powers over all types of dissent — so deemed by Beijing — in the city.

Disturbingly, these men have deep backgrounds in religious and ethnic persecution, so religious minorities in the city including Catholics have every right to be concerned about Beijing's latest moves.

In 2010, Luo was moved to the western province of Qinghai, one of three Chinese provinces that collectively take in about half the full territory of Tibet. He served first as governor for three years and then as party secretary until 2016, enforcing Beijing’s policies of cultural and religious destruction on the Tibetan people. He was then moved to Shanxi province until 2019.

“He was successful in cleaning up the mess in Shanxi,” Willy Lam, adjunct professor at the Centre for China Studies at the Chinese University of Hong Kong, was quoted as saying in the Financial Times. As Luo has reached retirement age and is not seeking promotion, he will have “no qualms about carrying out Beijing's draconian orders,” Lam added.

Then, in February this year, Xi appointed Xia Baolong as director of the Hong Kong and Macau Administration Office, the effective United Front division in the city.

Xia is one of Xi’s protégés from his time as party secretary of coastal Zhejiang province, a business hub that contains the metropolises of Hangzhou and Ningbo, and eventually rose to the job of party secretary.

Zhejiang is one of the centers of Christianity in China and the city of Wenzhou is sometimes referred to as the “Jerusalem of the East” due to the number of churches there.

It was under Xia that the infamous cross removal campaign began in 2013. More than 1,200 crosses were removed from churches and churches were demolished under the excuse that they had violated property laws.

The campaign lasted until Xia stepped down in 2017 after being promoted to a vice-chairman of the Chinese People’s Consultative Committee.

In hindsight, this campaign was something of a test run for a fresh crackdown on religion by Xi Jinping that started in 2015 and has continued to escalate to this day.

Xi has made it clear that he sees religion — particularly “foreign” religions such as Christianity and Islam as well as Tibetan Buddhism — as undesirable and a threat to the Chinese Communist Party.

The Christian religion — across all its denominations — is both the basis of and a reflection of the liberal Western tradition that has resulted in the flowering of democracy across the Western world.

If the worst fears of Beijing’s critics come to pass, and the security legislation that is set to go before China’s rubber-stamp parliament on May 28 brings about a hard clampdown on the city, Hong Kong Catholics have every right to be worried.

The presence of ruthless party men like Xia and Luo doing Xi‘s bidding makes this even more concerning. Will Beijing continue to make an exception and leave Hong Kong’s Catholics (and Protestants and Muslims who face the same fears) alone for now?