Justice and Peace Commission members visit sites of Gwangju Uprising when up to 2,000 died in protest against military rule 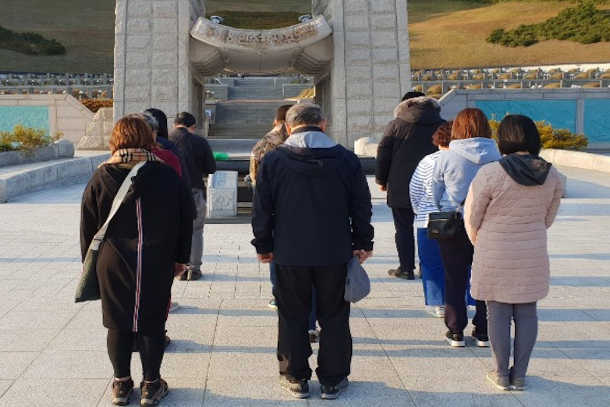 Members of Hong Kong Justice and Peace Commission (HKJPC) visited Gwangju in South Korea to learn about the people's struggle for democracy.

They heard about the Gwangju Uprising in 1980 when citizens took up arms after Chonnam University students demonstrating against the military government were beaten by soldiers. South Korean authorities said about 200 died in the uprising from May 18-27 but activists put the figure at about 2,000.

The journey began with a tour of historical sites of the uprising guided by Kim Do-won, who survived the suppression. Kim Yang-rae, who was sentenced to jail for taking part in the uprising, spoke about the actions of the Catholic Church during and after the uprising.

The group visited the May Mothers, formed by women in the resistance and the mothers or sisters of victims, the May 18 Memorial Foundation, Gwangju Trauma Center and Gwangju Human Rights Peace Foundation, which supports victims of state violence.

Participant Lee Yuk Mei told ucanews.com that walking in the historical sites "I felt like I was at the scene of the struggle at that time and I could feel the road of resistance of the Gwangju people.”

"We received a warm reception from many local organizations and groups," said Molly Chu, a catechumen.

During and after the uprising, demonstrators were smeared as rioters and communists. While Gwangju was isolated, the Catholic Church recorded the truth and was the first to disclose the truth. The priest responsible for this task was arrested and interrogated.

"In times of turbulence, the church plays a significant role. Because we have the support from our faith, we need not be afraid and we can take a step forward," said Lee Yuk Mei. Members of Hong Kong Justice and Peace Commission visit the May Mothers in Gwangju. (ucanews.com photo)

Participants compared the Gwangju Uprising with the Tiananmen Square massacre in China in 1989. Both were brutally suppressed by governments who tried to conceal and twist the truth. Both countries are also facing the challenge of how to educate the new generation.

Joyce Au, who has been involved in the Union of Hong Kong Catholic Organizations in Support of the Patriotic and Democratic Movement in China for many years, said her Gwangju experience had strengthened her to press on.

"I realized that the union's work over the years is so similar to what citizens and the church in South Korea have been doing. I feel that we are walking together," she told ucanews.com.

Several South Korean youths shared their views on the uprising as well as their own experiences.

"I remember one of them said that even one person's voice is a voice, and one's strength is power," said Au.

As the Gwangju journey came to the end, the trial of nine people for the 2014 Umbrella Movement in Hong Kong opened.

"The [Hong Kong] government has repeatedly prosecuted those who participated in demonstrations. This made people discouraged and disappointed, care about personal development only and become indifferent to social issues," said HKJPC project officer Jackie Hung.

She thought that although Hong Kong and South Korea have different historical and cultural backgrounds, and Hong Kong still lacks a democratic system, "I kept thinking during the trip if Gwangju citizens gave up like Hong Kong people, the truth of the May 18 Uprising might never have been known to the world."

This was the second "Justice and Peace Journey" following a trip to Seoul last August with visits to civil society groups, Catholic media and lay movements to learn about the social participation of the church.