Martin Lee championed democracy in Hong Kong for many years as Britain negotiated the handover of its then colony to Beijing. (Photo: YouTube)

Martin Lee Chu-ming, known to many as the "father of Hong Kong democracy," has been nominated for the Nobel Peace Prize after China’s crackdown on the enclave effectively dashed promises of universal suffrage made before the 1997 handover.

Two Norwegian parliamentarians nominated the veteran pro-democracy leader, saying he was “a source of inspiration for the pro-democracy movement in Hong Kong and advocates for freedom around the world.”

He is currently on bail awaiting trial following his arrest last year with 14 others for unauthorized assembly in the wake of massive pro-democracy marches in August and October 2019.

Lee, a London-trained Catholic barrister, championed democracy for many years as Britain negotiated the handover of its then colony to Beijing and worked closely with its last governor, Chris Patten.

He was founding chairman of the first pro-democracy party, the United Democrats of Hong Kong, in 1990 and led its successor, the Democratic Party, while serving in the territory’s legislature for more than two decades.

Importantly, he served on the drafting committee for the Basic Law, also known as Hong Kong’s mini-constitution, which was supposed to guarantee 50 years of autonomy under the “one country, two systems” framework while protecting basic rights including freedom of assembly and free speech.

Lee, 82, was nominated for the Peace Prize by two members of the Norwegian Conservative Party, Mathilde Tybring-Gjedde and Peter Frolich, who noted Lee had devoted his life to the cause.

“Martin Lee Chu-ming has pursued every avenue for over 40 years that has been at his disposal for the aim of securing freedom and safety for the people of Hong Kong,” Tybring-Gjedde said.

As a politician and member of the legal profession Lee had fought for a democratic constitution in Hong Kong before and after the 1997 handover, Frolich said.

“He has worked peacefully for democratic institutions, free elections by universal suffrage, and political and civil rights, even in the face of mounting pressure from mainland China,” he said. 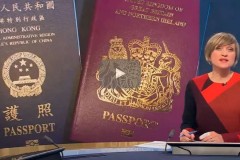 Their nomination of Lee will anger the Chinese government and irritate pro-Beijing supporters in Hong Kong, where the crackdown on pro-democracy activists and their arrests have sparked a long-running outcry, particularly in the West.

Britain has responded, offering special visas with the right to remain in the UK to holders of the British National (Overseas) passports, which were issued prior to the handover.

The Norwegian Nobel Committee normally announces the Nobel Peace Prize in October before it is presented in December. However, there have been exceptions when no awards have been made due to war or a lack of suitable candidates.