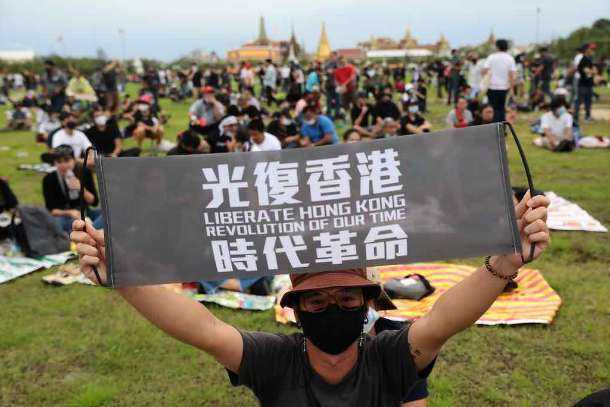 A Thai pro-democracy protester holds up a 'Liberate Hong Kong' banner during an anti-government rally in Bangkok on Sept. 19. A youth-led movement wants Prime Minister Prayut Chan-o-cha to step down and is demanding reforms to the monarchy. (Photo: Jack Taylor/AFP)

The social unrest and divisions in general Hong Kong society have carried over to the Catholic community, said Cardinal John Tong Hon, who encouraged Catholics instead to follow what Jesus taught in the beatitudes.

"Every member of the faithful is free to adopt a stance in regard to social or political issues by following the dictates of his/her conscience and in the light of the Gospel and the social teaching of the church," Cardinal Tong said in a pastoral letter released Sept. 21.

"Naturally, as among common people, there will be different views even among the faithful, granted that social and political issues are often complex and do not admit of simple or ready answers. Nevertheless, differences in viewpoints must not give way to a division in the church."

"We must bear in mind the teaching of Vatican II that all the faithful are to strive to preserve church communion, and they are to take account of the common good of the church even when exercising their own rights," the cardinal added. His letter was published in Sunday Examiner, newspaper of the Diocese of Hong Kong.

Earlier in September, the cardinal warned priests to avoid "slanderous and offensive statements which insinuate or incite hatred, cause social unrest, are contrary to the Christian spirit and are never appropriate in the liturgy."

In his pastoral letter, the cardinal said "priests should enlighten the faithful and form their consciences with the social teaching of the church, so that they can adopt a balanced approach and take the right course of action while engaging themselves in social concern activities. Priests, however, should not exert their influence in those areas."

He noted that while the Second Vatican Council urged pastors to encourage laypeople to take an active part in the church and in society, "the same council equally emphasizes that laypeople are to obey and duly respect their pastors."

"Catholics who arrogantly challenge or criticize the church, or even slander church leaders, are simply setting a bad example and creating a split in the church. Only by preserving their communion with the hierarchy can Catholics truly manifest the 'sense of faith' ('sensus fidelium') as advocated by Vatican II," he said.

Cardinal Tong, apostolic administrator of the diocese, also addressed concerns about Hong Kong's security law, which was rushed through the Standing Committee of China's National People's Congress June 30. He said the Catholic Church supports democracy, and Catholics have a right to expect the local government to act to support their aspirations for justice.

However, he said, many local Catholics "bear a gloomy outlook about the future of Hong Kong. They have based their views on the uncertainties about the rule of law and the political reform, and the almost unbearable impacts of the COVID-19 pandemic on our local economy and livelihood. I earnestly call on these Catholics to place an unwavering hope in Jesus Christ."

"The social turmoil last year and the current pandemic have made great impacts on Hong Kong, and we can foresee new challenges to our evangelizing mission in the years to come. Therefore, entrusting ourselves to our Lord's fatherly care and with one mind and one heart, let us equip ourselves for the mission ahead," he urged.