Prelate says the 'future of humanity' is at stake 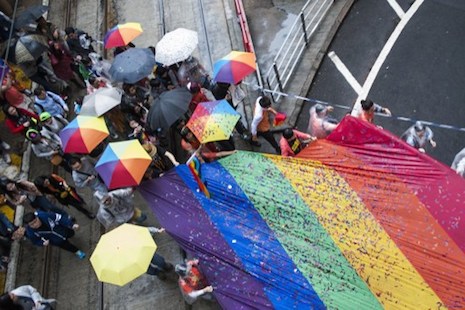 Cardinal John Tong Hon of Hong Kong has rejected redefining marriage while gay Catholics in the special administrative region think the diocese's pastoral approach will create more difficulties rather than be a source for healing.

A pastoral letter published in diocesan newspapers on Sept 27 provoked a renewed discussion among Hong Kong’s Catholics after a private meeting between Pope Francis and Kim Davis, a U.S. county clerk who refused to issue a marriage certificate to same-sex couples, was leaked to the press on Sept 30.

Their meeting during the pope's U.S. visit was widely interpreted as encouragement to those who reject the U.S. Supreme Court’s ruling allowing same-sex marriage.

Diocesan Family Commission officer Michael Tse said the pastoral letter was timely. "Though the situation of Hong Kong is not as serious as Taiwan or the U.S., the storm is coming soon," he told ucanews.com.

In his pastoral letter, Cardinal Tong reflected on marriage and family life, citing Pope Francis' encyclical Laudato si', which examines "the relation between human life and the moral law."

He also discussed the U.S. Supreme Court decision in Obergefell vs Hodges, likening the result as "climate change in moral attitudes and conduct toward sex and marriage."

The actual approach of the diocese toward gay Catholics is often considered a disaster among some community members who said they could not publicly announce their sexuality due to the conservative environment in Hong Kong.

"They just do not know they are hurting us. I hope the church can have more substantial ways to help LGBT people spiritually and psychologically, rather than denying us," said Teresa, a lesbian Hong Kong Catholic.

"Some church people, including clergy, stigmatize gay people as abnormal people with abnormal behavior. They help us in the name of mercy and love while actually they want to turn us 'straight.' This is not help. It only makes us feel more pain," she said.

Aloft Tai recalled a negative experience she had last year in joining a diocesan-run forum on gay issues with some gay friends.

"The open event was turned into a closed-door discussion at the end with only pre-registered participants allowed. Before the forum began, the host told the participants to stay calm if any conflicts arose. They assumed that the LGBT participants must be very violent," she said.

"The event was so guarded that I felt like I was participating in a controversial political forum. On seeing this, how would those gay Catholics feel even if they want to follow church teaching?"