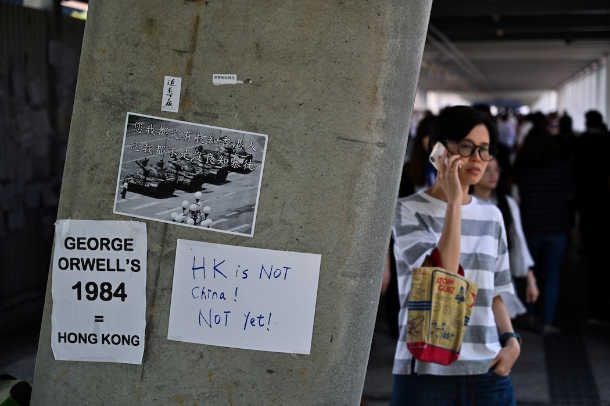 People walk past placards against a controversial extradition law proposal pasted on a wall near the Legislative Council Complex in Hong Kong on June 14. (Photo by Hector Retamal/AFP)

Ever since the Long March, Xinhua News Agency has been the "eyes and tongue" of the Chinese Communist Party, an information source accomplished in the dark arts of propaganda, oblique with news and a regular read for journalists covering the region.

Its diatribes are notorious, often couched with language that takes practice to decipher and its contribution to the English language range from “capitalist pig” to “running dog” — while blaming foreigners for Beijing’s own shortcomings.

Over the years Xinhua scribes have toned down the communist claptrap but there are rules, lots of them, for more than 8,000 staff in 171 foreign and local bureaus and the newspapers and magazines that fall under Xinhua’s jurisdiction.

Ethnicities are out, nationalities only. Importantly, never mention Hong Kong or Macau with China respectively as that might put the territories on equal sovereign standing with the "mainland" — a preferred alternative word for the People’s Republic.

And there’s “… avoid anything that is against the ‘one country, two systems’ policy”. Then there’s “… avoid using self-praising phrases to describe anti-China parties in Hong Kong and Macau. For example, Umbrella Movement should be called ‘illegal Occupy Central’.”

As Reporters Sans Frontiers noted in a landmark report, updated in 2016, “Xinhua is at the heart of censorship and disinformation put in place by the Communist Party.”

But Xinhua’s importance within the Chinese system cannot be underestimated. Its president is a member of the Central Committee and major government decisions are often announced first by the agency, making it a must-read for China watchers.

And that can be difficult. The news service has a bad habit of burying genuinely important stories regarding state policy — like revaluing its currency, tariffs or leadership changes — amid a plethora of rank social commentary.

Handling complaints and reporting on government issues, such as corruption within the ranks, has never been a strong point. After all, that’s not the job of a propaganda machine and the silence from Xinhua when major stories break that paint Beijing in an unwanted light can be deafening.

This is evident on every June 4 anniversary of the 1989 Tiananmen Square massacre; however, it did attempt coverage of the recent million-strong protests in Hong Kong, albeit with lame results.

After the June 9 protest — demanding an end to a planned extradition law enabling Beijing to seize and prosecute political dissidents, human rights advocates and corrupt businessmen — the Chinese government was indignant and shamed by independent media elsewhere.

Protesters cleaning up their own rubbish might have been too positive for Xinhua editors to stomach but minor scuffles with the police were not.

It also cited a spokesperson with the Chinese Ministry of Foreign Affairs as saying any attempt to create chaos in Hong Kong and disrupt “its prosperity and stability will certainly be opposed by all the Chinese people and doomed to failure.”

The following Sunday the number of protesters doubled to more than two million, passage of the legislation was suspended, and Hong Kong chief executive Carrie Lam apologized. Historical stuff that went largely ignored by Xinhua but the like-minded China Daily was on the job.

The newspaper tweeted: “Parents in the Hong Kong Special Administrative Region took to the streets on Sunday to urge U.S. politicians not to interfere with the SAR’s extradition amendments and its internal affairs.” Chinese journalists from Xinhua News Agency work at their Beijing office in this file image taken on Aug. 6, 2008. (Photo by Jewel Samad/AFP)

The BBC made its reputation in World War II by reporting the facts amid the propaganda, even winning listeners among the Nazis in Germany.

But China is not at war and Xinhua functions more as an echo chamber for government policy and wishful thinking among Beijing’s unelected leaders, a voice amplified even further by a lack of objective, independent reportage on home soil that reflects public opinion.

RSF poignantly noted that since October 1949, once the revolution was over, “this state-run news agency has been completely subordinate to the CCP.”

Xinhua remains the voice of the sole party. Handpicked journalists, who are regularly indoctrinated, produce reports for the Chinese media that give the official point of view and others — classified “internal reference for the country's leaders,” it said.

Such reports include Beijing’s pet peeves like young Chinese men who prefer make-up and eschew masculinity. They have been dubbed by Xinhua as “sissy pants” or “little fresh meats.” Women who prefer not to marry are mocked as “leftovers.”

New Zealand politician Winston Peters earned the moniker “old naughty” or “old bum.” Indian Prime Minister Narendra Modi, during a border dispute with China, was once likened to “a robber who had just broken into your house and refused to leave.”

Much worse is in reserve for United States and Japanese leaders.

On a serious note, it did make an effort to put public safety first with reports that embarrassed the government during the deadly 2002/03 SARS epidemic, which was initially ignored.

Those reports, however, were published in English and not Chinese, indicating Beijing was more interested in placating international criticism of its handling of the crisis and the dissemination of information than the health of its own public.

The idea that a government can write its own agenda, then decide what people’s needs are before deploying the world’s largest news agency to impose their values, without being held to account, is particularly sinister.

Which is why Xinhua holds pride of place among Beijing’s ruling elites.