Missionary, lay catechist killed in 1960 by the Pathet Lao 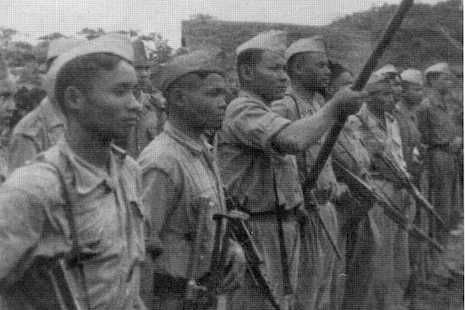 During a private audience on Tuesday, Pope Francis advanced the causes of canonization of 12 potential saints, two of whom were martyred by communist revolutionaries in Laos in 1960.

The May 5 audience with Cardinal Angelo Amato also formally approved the canonization of Bl Junipero Serra, which had already been scheduled for September 23.

The two martyrs recognized were the Servants of God Mario Borzaga and Paul Thoj Xyooj, who were killed in hatred of the faith in April 1960.

Born in Italy in 1932, Fr Borzaga joined the Missionary Oblates of Mary Immaculate at the age of 20, and was ordained a priest at 25. In 1957 he was sent as one of the first Italian missionaries to the Oblate mission in Laos, where the Pathet Lao, communist revolutionaries backed by North Vietnam, had begun a civil war four years earlier.

Fr Borzaga spent the first year of his missionary life studying the Lao language. His diary, “To be a Happy Man,” describes the difficulty of the mission, which was aggravated by the Pathet Lao.

After visiting the Christian community in the Hmong village of Kiucatiàm in 1958, where he met with families and cared for the sick. Another group of Hmong from Pha Xoua asked him to visit their own village in 1960.

He set out April 25 on a three day mountain trek for the village, where he was to spend two weeks. He was joined by Paul Thoj Xyooj, a young lay catechist. The two vanished after a day of working with the sick and were never found, despite various searches.

Testimonies gathered since their disappearance confirm that the two were killed by the Pathet Lao.

The Pathet Lao defeated the royalist forces in 1975, and Laos has been a communist state ever since. Foreign missionaries were expelled or fled that year, and now fewer than two percent of Laotians are Christian.

Pope Francis and Cardinal Amato also recognized three miracles. Two were attributed to the intercession of blesseds: Bl Vincenzo Grossi, an Italian priest and founder of the Institute of the Daughters of the Oratory, and Bl Maria of the Immaculate Conception, Spanish superior general of the Sisters of the Company of the Cross. With the approval of the miracles, a date now can be set their canonizations.

A third miracle was also approved for Venerable Giacomo Abbondo, an Italian diocesan priest who lived 1720-1788. A date can now be set for his beatification.

Francis also acknowledged the heroic virtue of seven Servants of God. Three were laypersons: Juliette Colbert de Falletti di Barolo, a widow who went on to found the Daughters of Jesus the Good Shepherd; and Sergio and Domenica Bernardini, a married couple and parents who died in 1966 and 1971, respectively.

The others Servants of God whose heroic virtues were recognized were Jacinto Vera y Duran, Bishop of Montevideo from 1859 to 1881; Antonio Antic, a Croatian priest of the Order of Friars Minor; Maria Brigida Postorino, Italian foundress of the Daughters of Mary Immaculate; and Maria Rafaela Jesus Hostia, a Spanish professed nun of the Order of Capuchin Poor Clares.