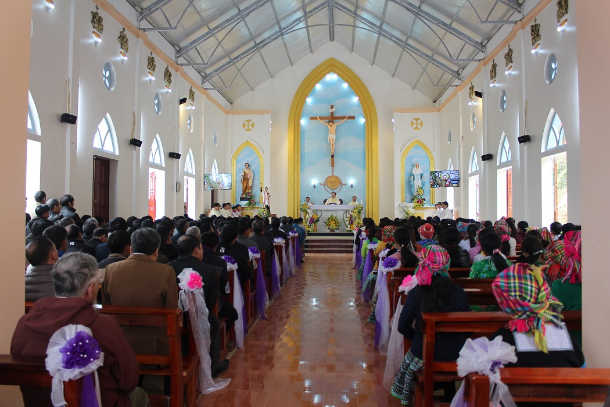 People attend the inauguration of the new church in Sung Do Parish. (ucanews photo)

Hundreds of ethnic Hmong Catholics in northwest Vietnam have inaugurated a new church one year after their old chapel was swept away by floods.

Around 500 people attended the Dec. 3 inauguration of the newly built church and parish house on the feast of St. Francis Xavier at Sung Do Parish in Yen Bai province.

Father Joseph Nguyen Trong Duong, head of Nghia Lo Deanery, and nine priests concelebrated the special Mass in which he said Sung Do had been elevated to full parish status and that St. Francis Xavier had been chosen as its patron. Sung Do had previously been a subparish.

Floods destroyed the community’s wooden chapel and washed away dozens of homes in July 2018.

The priest also asked the gathering to pray for the benefactors who funded the reconstruction work.

Father Anthony Nguyen Tan Hoi, who provides pastoral care in the parish and supervised the reconstruction, said the new church, with an area of 300 square meters and a 20-meter-high bell tower, cost 2 billion dong (US$86,500) to build.

Father Hoi, who is an architect, said he designed the church, which is built on the site of the old chapel.

The priest said local people had to carry the building materials 20 kilometers along mountainous paths to the construction site. All were volunteers and devoted their spare time to rebuilding the church, he said. “We are very happy to have a new church so that we can live out our faith,” said Joseph Giang Vang Sang, head of the new parish council.

Sang said most local people are descended from several dozen Hmong families who moved to the area in 1967.

They cultivate crops, forage in forests for a living and live in poverty. They had to pray in their homes until 1992 before erecting a small wooden chapel.

Auxiliary Bishop Alfonse Nguyen Huu Long of Hung Hoa had offered them money to enlarge the chapel in 2017 but it was destroyed by last year’s floods.

Sang said many people were devastated by the floods and chapel’s destruction because they thought they would not be able to build a new one.

He said Father Hoi found Catholic associations that help build public facilities and who have also provided them with clean water and toilets.

The new parish of Sung Do, which includes Ngon Lanh subparish, has 800 ethnic Hmong parishioners.

Father Duong said the new church is the first for Hmong Catholics in the deanery as other areas only have wooden chapels like the one that was washed away.

He said evangelizing and offering pastoral care to these people, who have suffered persecution and hardship for decades, is high on the diocese’s list of priorities.

Nghia Lo Deanery has 15 parishes with 14,000 Catholics, half of them ethnic Hmong. They are served by eight priests.