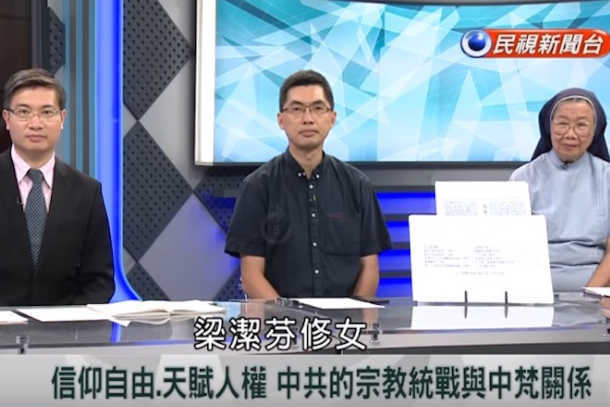 They told the Formosa News Taiwan program that religious freedom in Hong Kong and in mainland China had been reduced by the United Front Work Department of the Chinese Communist Party (CCP).

Sang Pu told the show that the CCP's policy of eliminating religion had been in place since its founding but had become more severe, especially after the implementation of revised regulations on religious affairs on Feb. 1.

After a Muslim CCP member returned from the Hajj in Mecca, he was expelled because no party members could have religious beliefs, he said.

"Some churches were forcibly demolished in front of the faithful. All holy icons posted in villages had to be replaced with a portrait of Xi Jinping, otherwise a government subsidy and poverty alleviation fund would not be available," Sang said.

Ying said the CCP still claimed to have religious freedom but it had been exploited and was different from what people thought.

"Their religious freedom is that you can believe in anything in your mind, but not necessarily practice it. The CCP looks at religion from the perspectives of national security, social stability and order, so there will be a lot of supervision and control over religious affairs," he said.

The professor noted that Chinese President Xi Jinping attached great importance to leadership of the party and liked to mention "strong grip" in his speeches.

Ying pointed out that in the long run the party would exercise very strict control over all aspects of religion. "We must pay more attention to the state of religious freedom in China," he said.

Sister Leung, a visiting research professor at Taiwan Wenzao Ursuline University of Languages, said China's banning of minors under 18 from entering churches was a fatal hit to traditional religions.

She said democratic management advocated by the CCP, letting priests, nuns and faithful manage the church without bishops representing Christ in the hierarchy, was another way to eliminate religions.

She said the Catholic Church in Hong Kong had a strong system and organization, so the CCP had little room for cooperation with the church. But they would use "sugar-coated poisons" such as giving money to priests and nuns.

Sang Pu felt that the Sino-Vatican agreement on the appointment of bishops would be signed but he was not optimistic about Taiwan-Vatican relations.

Sister Leung said the CCP hoped to sign an agreement with the Vatican but Pope France did not immediately agree after seeing strong opposition. She believed it was not urgent for the Vatican to establish a relationship with China.