Monk dies, thousands displaced as surging water from torrential rain washes people out of their homes 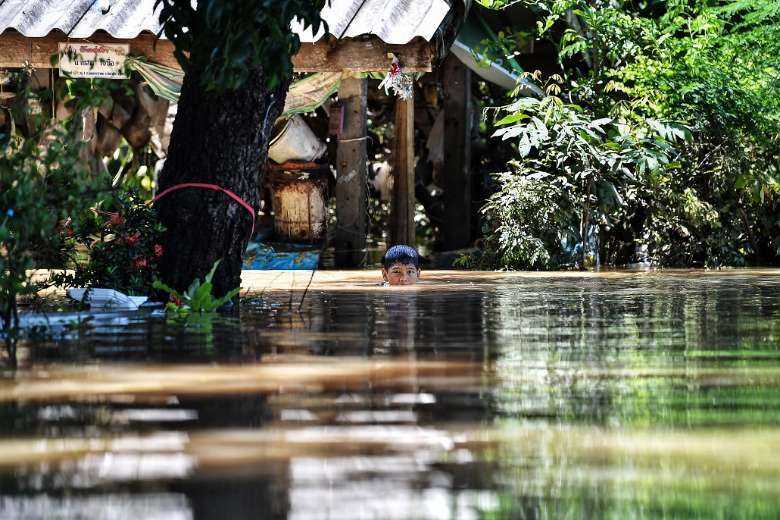 A boy swims through a flooded village in the central Thai province of Lop Buri on Sept. 28 as tropical storm Dianmu caused flooding in 30 provinces across the country. (Photo: AFP)

Hundreds of thousands of people have been affected and thousands have been displaced in several provinces as surging water from torrential rain washed many people out of their homes, including Sukothai and Ayutthaya, two historic capitals of Thailand.

Over the weekend people living in several provincial towns and numerous villages were reduced to wading in knee-deep and waist-high water as almost all normal activities came to a halt.

Among the buildings affected by the floods have been ancient Buddhist temples such as Wat Chula Manee, a temple built in 1750 in Ayutthaya, whose grounds were flooded on Oct. 3 after a section of its periphery wall collapsed in the deluge.

The grounds of the ancient temple in the historic town’s Bang Ban district were inundated under some 2 meters of water, which caused extensive damage to 20 pagodas containing the ashes of locals’ ancestors held in funerary urns.

“The highest volume of water running through the water measurement station in Ayutthaya’s Bang Sai district was 2,800 cubic meters per second,” said Somkiat Prajamwong, retired secretary-general of the Office of National Water Resources.

Shortly before he died, the elderly monk had told other monks that he was suffering from chest pain and feeling tired after lugging sandbags

At another flood-impacted Buddhist temple in the northeastern town of Buriram, a monk died on Oct. 2 after packing sandbags as a protective barrier against floodwater.

The 67-year-old clergyman, who was originally from Luxemburg and ordained as a monk in Thailand 16 years ago, was found to have died of heart failure from exhaustion.

Shortly before he died, the elderly monk had told other monks that he was suffering from chest pain and feeling tired after lugging sandbags around his dwelling to fortify the premises against the water.

Large parts of Thailand experience floods each year during the monsoon season, but this year’s floods have proved especially severe.

However, government officials have said that there was little chance that Thailand would suffer the same catastrophic floods that it did in 2011 when large parts of the country, including Bangkok, were inundated in deep water for weeks.

So far this year Bangkok has been spared from flooding, although people in some suburbs have been bracing for the prospect.

Communities lying outside Bangkok and alongside the lower part of the Chao Phraya, the country’s largest river, continue to be inundated as heavy rains carry on swelling the already overflowing waterway’s level.

Villages near the Buddhist temple of Saeng Siritham in Nonthaburi, a central province outside Bangkok, have been grappling with overflows after heavy rain and during high tide.

“Residents have already moved their belongings to higher floors and are continuously monitoring water levels,” a local newspaper reported.