Church’s first couple to be canonized together had values of 'love, fidelity and welcoming life' 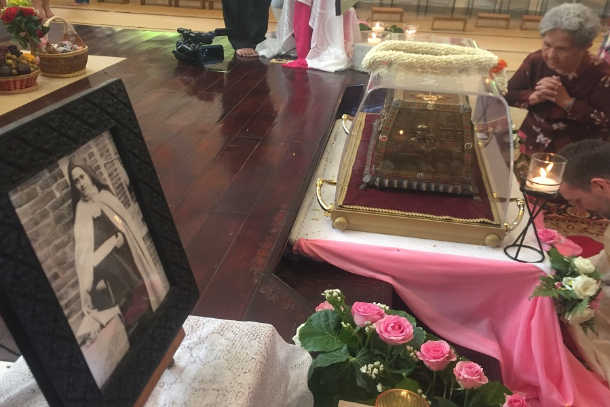 A photograph of St. Teresa of Lisieux stands over the reliquary containing the relics of her parents, Saints Louis and Zélie Martin, at the final Mass in their honor in Phnom Penh on Sept. 15. (Photo by Carol Isoux)

The relics of Saints Louis and Zélie Martin left Phnom Penh on Sept. 16 after spending nearly three weeks in Cambodia.

Their stay in the country was marked by Masses, processions, teachings and shows, while vigils were organized in Phnom Penh and major provincial cities Battambang and Kampong Cham.

Bishop Olivier Schmitthaeusler, the apostolic vicar of Phnom Penh, celebrated a Mass in the Cambodian capital and venerated the relics on the eve of their return to France.

During his homily, Bishop Schmitthaeusler said he wanted to show another model of parenthood, “an example of holiness in the couple and in the family,” through the Martins, who became in 2015 the first spouses in the Church's history to be canonized as a couple.

The 19th century Martins were also parents to five Catholic nuns, including St. Teresa of Lisieux.

The values of “love, fidelity and welcoming life” were highlighted by Bishop Schmitthaeusler.

The little church of the Child Jesus, in Phnom Penh’s semi-urban district of Sangkat Boeng Tumpun, was packed to capacity for the occasion.

During their time in Cambodia, the relics visited many parishes in the apostolic vicariate of Phnom Penh and in the provinces of Battambang, on the Thailand border, and Kampong Cham, in the nation's center. These are the nerve centers of the country’s small but fervent Catholic community, which numbers nearly 20,000.

A ‘parish of intellectuals’

The Mass was attended by the parish’s regular audience: families and young couples. Most of them originally came from poor provincial households who, thanks to financial assistance from the community, were able to study and now hold skilled jobs. Many of them are doctors, accountants, nurses and teachers.

Dr. Sakda, a modest family man from the southern province of Takeo and a father of three, was at the Mass.

“During my studies, I wondered why missionaries did what they did, without any apparent equivalent elsewhere,” recalled Sakda. “It made me interested in the Gospel and I wanted to convert.”

A graduate in general medicine, he now works in one of the few clinics in the country that offers palliative care. “Pain management is not considered a priority in our country,” he said, ruefully.

About 10 African parishioners from Mozambique and Uganda were also present at the Mass.

‘Holiness in the couple’

The relics of St. Teresa were brought to Cambodia in 2013. The bringing the relics of her parents this time around was an "example of holiness in the couple, in the family,” said Bishop Schmitthaeusler.

The bishop said that raising children in love is a important message for Cambodia, where the family structure is in turmoil and needs to be reinvented.

“One of the first things Pol Pot and the Khmer Rouge did when they came to power was to destroy family units. It did this by massive dispersal operations, sending people to work in camps across the country, and by organizing forced marriages," he said.

“Cambodian society is just recovering from the Khmer Rouge ordeal, the after-effects of which are still visible everywhere, including through a gaping hole in the age pyramid.

“Because of poverty, many families are broken up, with parents forced to entrust their children to the elders who have remained in the countryside. In poor families, it is common [for children] to see their parents only once or twice a year.”

The purpose of evoking the memory of the Martin couple was therefore to propose another model of parenthood. “A different model from the one conveyed by advertising,” he said.

“Faced with the model of families living in a condo with only one child, who is treated like a small king — a somewhat narrow life, in short — we wanted to propose the model of a family open to the world and to others.”

‘It gives me hope’

The Martins opened their home to the poor once a week and offered them food in the presence of their daughters.

As wealthy French merchants — Louis was a renowned watchmaker and Zélie a talented lacemaker — they made important donations to foreign missions in the hope that one of their two sons would become a missionary, but both died at an early age.

Their five daughters, once they reached adulthood, entered religious congregations and Teresa became patroness of the missions without ever having left the Carmel of Lisieux, apart from one trip to Rome before becoming a religious. A dozen couples renewed their marriage vows in front of their children. (Photo by Carol Isoux)

The Mass to bid farewell to the relics also included a blessing ceremony for couples collectively renewing their marriage vows.

Kneeling opposite each other, with their hands joined, a dozen couples of all ages repeated, eye to eye, the words of the priest, in the presence of their children.

It was a moving moment in a country where physical demonstrations of affection are still very rare. “It gives me hope,” said one of the wives as she touched the casket containing the relics at the end of the ceremony. “I tell myself that even in our society, fidelity may be possible, after all.”

The Mass was rich in Cambodian culture, notably containing a colorful performance of Khmer dancers, a discipline that combines music, dance and epic narrative.

But the Church in Cambodia has barely recovered from the ordeal of the Khmer Rouge, during which “we almost disappeared,” said Bishop Schmitthaeusler. He wore around his neck a cross inherited from Bishop Joseph Chmar Salas, his predecessor and Cambodia’s first native bishop, who died of exhaustion in a labor camp in 1977.

For more than two decades, Bishop Schmitthaeusler has worked to revive the Catholic Church in Cambodia through two key principles: evangelization and development.