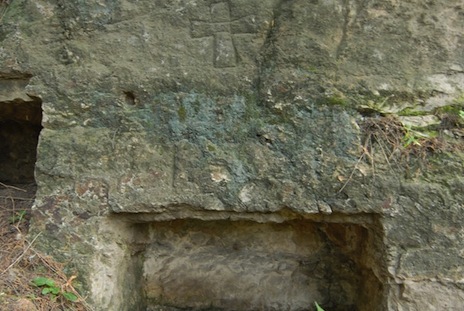 The carved Nestorian cross can be seen above the niche, indicating that this was an early burial place for Christians

A recently discovered site may shed new light on historical research into the Nestorian Church, which is believed to be the earliest Christian movement to spread the Gospel in China.

A niche in a stone wall with a cross carved above it has now been verified by experts as a repository for the ashes and bones of Christians. The experts also confirmed that this is the earliest Nestorian burial place discovered so far in China.

The discovery at the Longmen Grottoes, a UNESCO World Heritage site in central Henan province, was made in 2009. Its verification was announced to the public this week.

Precise dating has yet to be carried out, but it would have been created at some time during China’s Ming and Tang dynasties of 316-907 AD. It has yet to be established if it is older than the well known Nestorian Stele, an inscribed limestone tablet found in Xi’an, Shaanxi, which dates back to 781 AD and is currently considered the most ancient Nestorian artefact.

The discovery was made by Jiao Jianhui, a researcher at the Longmen Grottoes Research Institute. The grottoes contain thousands of Buddhist and Daoist statues and carvings, But Jiao told ucanews.com that “this is the first discovery of a religious relic other than that of Buddhism and Daoism”.

Jiao recalled the moment when he discovered the site by chance. “I felt instantly that it was different from other niches and grottoes,” he said.

“There are many similar niches at the grottoes, carved with Buddha statues as well as inscriptions to say that the deceased are buried there. So it is certain that the Nestorian site was also for burials.” he said.

Originating in the Middle East in the fifth century AD, the Nestorian Christian Church was initially recognized by the Tang Emperor Taizong but suppressed by his successors.

As Jiao pointed out, the discovery of the site puts a different perspective on historians’ beliefs about those early days in China. “Historical records shows Buddhist suppression of the Nestorian Church in the Tang Dynasty,” he said. “But the niche shows some religious tolerance, as the two religions could coexist harmoniously at the Grottoes.”

Now known as the Assyrian Church of the East, the Nestorian Church was regarded by the Catholic Church as schismatic. But in 1994, the two Churches signed a common declaration of doctrine.