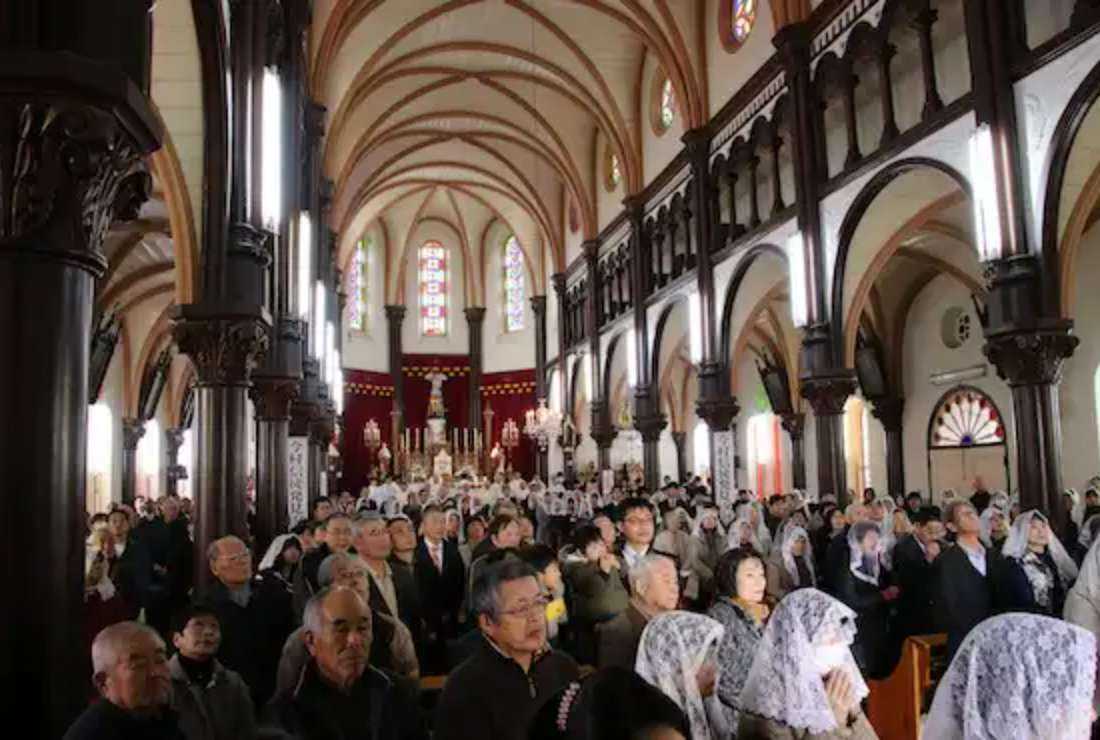 Japan's Imamura Christians celebrate 150 years since another secret Catholic community made contact with them on Feb. 26, 2017 at the Imamura church in Fukuoka Prefecture. (UCA News photo)

A research team from Japan has discovered a letter from 17th-century Japanese Catholics to Pope Paul V, making it the first artifact of its kind found outside the Vatican.

The discovery of the scroll in Florence, Italy is part of an on-site study program titled “Vatican & Japan: The 100-Year Project” organized by the Kadokawa Culture Promotion Foundation and sponsored by the Asahi Shimbun and the Vatican’s Pontifical Council for Culture, the Asahi Shimbun reported on Nov. 21.

The project, supported by various Japanese companies, focuses on the diplomatic relationship between the Vatican and Japan that “wishes to contribute to furthering this friendship over the next 100 years.”

Shinzo Kawamura, a professor of history at Sophia University in Tokyo, and lead researcher of the project considers the discovered scroll as the original letter that was sent by the Japanese Christians.

“The one in Florence is very likely the original letter,” Kawamura was quoted as saying by the Asahi Shimbun.

He also added that “multiple copies were apparently made in an attempt to defend the Society of Jesus (Jesuits), which was then blamed for not having prevented a religious ban, against a range of critics.”

"Similar notes were delivered from five areas across Japan"

The letters sent between 1620-1621 are appreciative notes in response to Pope Paul V’s letter of encouragement to Japanese Catholic converts who faced persecution from feudal authorities during the early Edo Period (1603-1867).

Researchers found the scroll with the word “first” written in Latin on its back in a Dominican convent’s library which belongs to a church in Florence.

Two other scrolls with the words “second” and “third” sent from the Tohoku region discovered earlier are now housed in the Vatican Apostolic Library.

The research team also found that the contents of the letter were the same as the copies of two replies from the Tohoku region that are stored at the Vatican.

The letters also include the name of Goto Juan (1578-1623), who converted to Christianity as a retainer of famed warlord Date Masamune (1567-1636), among other individuals.

Researchers say that apart from the Tohoku region, similar notes were delivered from five areas across Japan including what is now Nagasaki Prefecture as well as the current-day Kinki regions.

Church records say that Catholicism came to Japan after Portuguese explorers established a sea route to Asia in 1498. It is believed that Portuguese missionaries brought Catholicism to Japan in the 1540s.

Jesuit missionary St. Francis Xavier and other Jesuits were among the first Catholic missionaries to land and evangelize in Japan.

"An order was issued to expel all Catholic missionaries"

Several feudal lords and their subjects converted to Catholicism and the faith continued to flourish in the late 16th century before facing extreme hostility from Japan’s military rulers.

During the rule of the daimyo (feudal lord) Toyotomi Hideyoshi (1585-98), an order was issued to expel all Catholic missionaries and some 137 churches were destroyed during the process.

The worst case of persecution occurred in 1597 when the Japanese feudal lords executed 26 Catholics including six Franciscan friars by crucifixion in Nagasaki.

In 1865, the Church opened the Minor Basilica of the Twenty-Six Holy Martyrs of Japan to honor the sacrifices of the martyred Christians.

The ban on Christianity was lifted in 1853 but evangelization was forbidden.

In 1873, the Meiji government finally lifted the ban on proselytization due to pressure from Western nations.