Move follows the arrest of two Muslim men accused of converting over 1,000 people to Islam A group of Hindu organizations in the northern Indian state of Uttar Pradesh is mulling ways to prevent religious conversions.

Two Muslim men were arrested last week on charges of converting over 1,000 persons throughout the country to Islam.

ABAP president Mahant Narendra Giri said the meeting’s agenda would be to ask ordinary Hindus to consider steps to bring back people who have changed their religion.

"We have always advocated gharwapsi or reconversion. Hindu seers and disciples would be given the task of convincing people those who have gone to other religions,” he said.

Human rights activist A.C. Michael told UCA News that ABAP has finally acknowledged the fact of some people being treated as outcasts based on caste lines, which compels them to take refuge in other religions.

“The same compulsion forced the architect of our constitution, B.R. Ambedkar, to take the life-altering decision of quitting Hinduism and taking up Buddhism,” he said.

“This acknowledgment also makes it clear that these conversions are happening in their own interest and will not be under any pressure or fraudulent means as claimed by fringe elements.

“Therefore, ABAP’s decision to reconvert them would not be in the interest of those who changed their religion to escape what they considered a threat to freedom — the caste system. In fact, even Ambedkar felt that conversion was the only method for marginalized communities to denounce the caste system.”

According to media reports, the Anti-Terrorism Squad (ATS) of Uttar Pradesh state arrested two Muslim men on June 21 for converting more than 1,000 people to Islam. 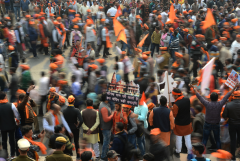 The ATS said the men received funding from overseas organizations. They targeted disabled children and other vulnerable groups.

Police said the case was also registered under the state’s new anti-conversion law.

Muhammad Arif, the Muslim chairman of the Centre for Harmony and Peace, told UCA News that akharas are the political wing of the pro-Hindu Bharatiya Janata Party (BJP), so it is natural for them to be active during the assembly election.

“We can call this development a damage control drive as the government has nothing new to give to the voters except false promises,” he said.

“The state government’s failure came to light when the Covid-19 pandemic hit the country. The situation was such that people here had a very hard time to perform even the last rites of coronavirus victims.”

Gharwapsi, a reconversion drive carried out by right-wing Hindu groups, has gained momentum since the BJP came to power

According to the state’s new anti-conversion law, no person shall convert or attempt to convert, either directly or otherwise, any other person from one religion to another by use or practice of misrepresentation, force, undue influence, coercion, allurement or by any fraudulent means or by marriage, nor shall any person abet, convince or conspire such conversion.

If any person reconverts to their immediate previous religion, the same shall not be deemed to be a conversion under the ordinance.

Gharwapsi, a reconversion drive carried out by right-wing Hindu groups, has gained momentum since the BJP came to power in New Delhi in May 2014.

Hindu nationalists often accuse Christians and Muslim of using force and surreptitious tactics in pursuing conversions, often storming into villages and leading reconversion ceremonies in which Christians are compelled to perform Hindu rituals.