Pakistani men handle a camel at an animal market in Karachi on Aug. 15. Muslims around the world will mark Eid al-Adha by sacrificing sheep, goats, cows and camels but Hindus in India are opposed to such slaughter. (Photo by Asif Hassan/AFP)

Share this article :
With the largest Muslim festival beginning this week, Hindu groups in India have asked Muslims to celebrate it without the ritual of slaughtering animals. Prominent groups such as Vishwa Hindu Parishad (VHP) and Bajrang Dal have asked the government to take measures against Muslims slaughtering goats, bulls, water buffalo or other animals during Eid al-Adha, also known as Bakr-Eid in India. They say such actions hurt Hindus' religious sentiments. Muslims across the world celebrate Eid by sacrificing a male animal and feasting on it to commemorate the willingness of the Prophet Abraham to sacrifice his own son before God. The feast is held on the 10th day of the final month of the Islamic calendar, which this year falls on Aug. 23. Muslims in other countries mostly slaughter sheep, goats, camels or bulls for Eid. As most Indian states have laws against the slaughter of bulls and cows that are sacred for Hindus, most Indian Muslims kill goats or water buffalo.
Related News 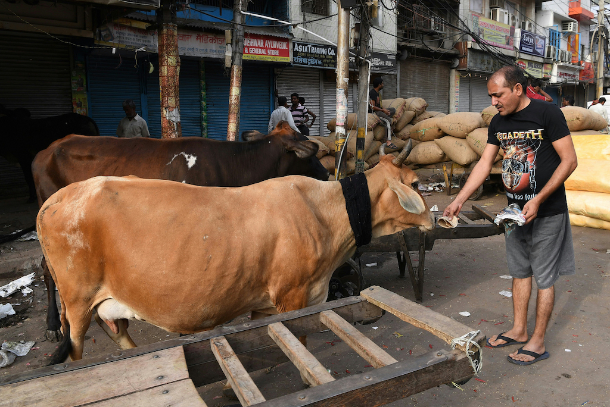 But Hindu leaders suspect Muslims in some areas slaughter bulls to feast on. "Muslims should celebrate their feast with no beef or in a non-violent way. If anyone violates the order, the government has to take stern action against them," VHP leader Vilas Nayak told a press conference last week. Raja Singh, a Hindu leader in Telangana, warned that if the state government failed to stop the slaughter of bulls over Eid, there was a chance of violence. Singh, an elected member of the state legislature, wanted the government to act. "If you don't put check posts outside the city and carry out raids in the old city, there is a 200 percent chance of mob lynchings and violence," he said. Rashid Ahmad, a rights activist based in the eastern state of West Bengal, said Indian Muslims and Hindus have been living in harmony for centuries and accused some groups of using religious festivals "to score political brownie points." "What do these fringe groups want to prove by raising the flag of cow protection? Is the Eid festival just a few years old in India and wasn't it ever celebrated in the country before," Ahmad asked. Muslims like him say Hindu groups want to project themselves as champions of the Hindu cause to gain votes for the pro-Hindu Bharatiya Janata Party in national and state elections due early next year. "The people of this country are well aware of such tactics now and wouldn't allow them to succeed in any way," Ahmed said. Hindus form 966 million or 80 per cent of India's population of 1.3 billion. Muslims account for 172 million or 14 per cent while Christians comprise 29 million or 2.3 per cent.