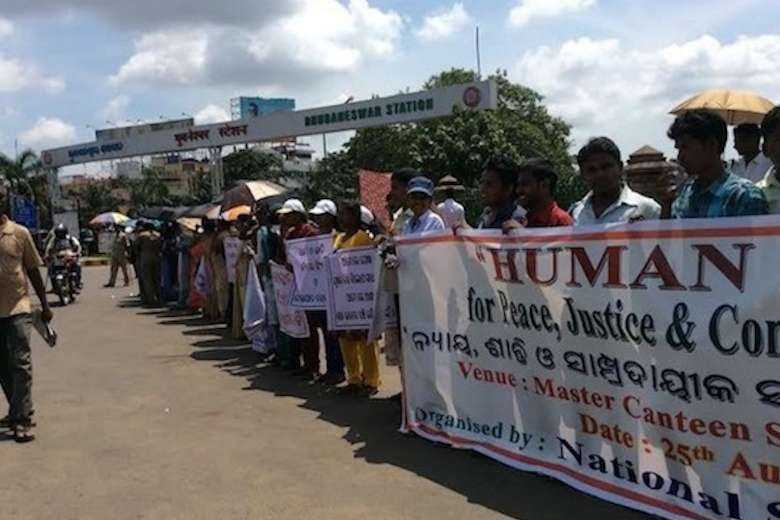 Christians in Odisha demand justice in August 2014 for the victims and survivors of anti-Christian violence in Kandhamal in 2008. (Photo: UCA News)

Police in the eastern Indian state of Odisha have filled a first information report after Hindus attacked Christian families for their faith and excommunicated them from their village.

A radical group destroyed the houses of Christians in Sikapai village of Rayagada district and chased them from the village on June 8, according to Father Purushottam Nayak, a priest of Cuttack-Bhubaneswar Archdiocese.

The Christians are staying in a thatched house in a nearby forest, he said.

“The Christians filed a report at Kalyansingpur police station and it is under investigation. The village is dominated by 32 Hindu families and there are only eight Christian families,” Father Nayak told UCA News on June 10.

He quoted Pastor Upajukta Singh as saying that the radical group could not tolerate the presence of Christian families in Sikapai and were jealous of their progress.

Pastor Singh said the Hindus had previously humiliated some Christian women when they went to fetch water. They even broke the bore well, forcing the women to go home empty-handed.

"Despite the threats, Christians here are still firm in their faith and have been practicing Christianity for the last 14 years,” he said.

Nori Konjaka, one of the Christians in Sikapai, said that "the attackers can destroy our homes but not our belief in Lord Jesus Christ."

Sajan K. George, president of the Global Council of Indian Christians, told UCA News that Rayagada district is a new crucible to experiment with anti-Christian violence.

“The cycles of violence and hatred in Rayagada are ominous signs of bigotry. We urge the Odisha chief minister to take visible action to curb the lumpen elements in our society for the safety and security of all sections of society,” the Christian lay leader said.

George said anti-Christian violence is nothing new in Odisha.

One of the worst anti-Christian riots started on Aug. 23, 2008, after Hindu leader Swami Laxmanananda Saraswati was shot dead as Hindus celebrated Janmashtami or the birth of lord Krishna.

Hindu radicals rounded on Christian targets after describing the murder as a Christian conspiracy. Violence that continued for seven weeks killed some 100 people, rendered 56,000 homeless and destroyed 6,000 houses and 300 churches.

Soon after the murder, four Christians including an illiterate 13-year-old boy were picked up by Hindu activists, beaten and dumped in police stations. It was not police but Praveen Togadia, the leader of Vishwa Hindu Parishad, who made public their names and accused them of killing the Swami.