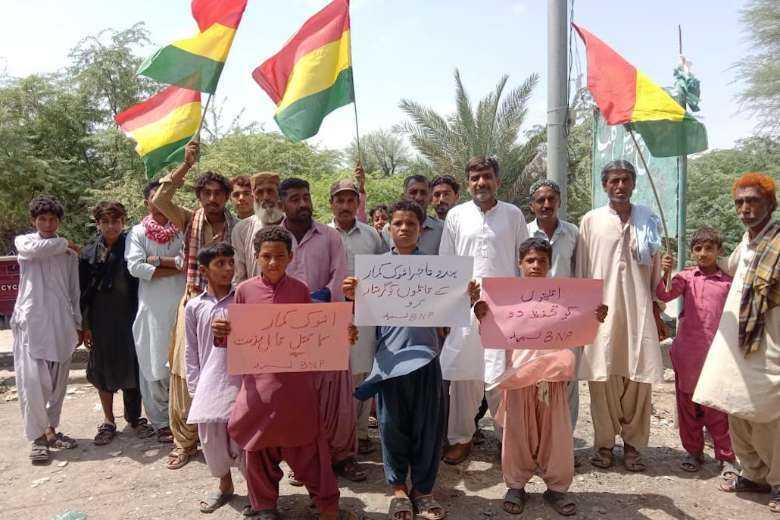 Hindus in Balochistan protest the murder of Ashok Kumar at the Press Club in Lasbela on June 3. (Photo supplied)

Handwritten pamphlets threatening Hindu traders have appeared in markets of Wadh town of Balochistan province where a Hindu businessman was gunned down last week.

“Women should be stopped from unnecessarily leaving their houses and roaming the markets. They are mostly seen in shops of Hindus,” stated Karwan Saif Ullah, an Islamist militant group, in a pamphlet recently spotted at a roadside signboard.

“Hindus are being requested to absolutely prohibit women in their shops. They will be responsible in case of permitting them inside. Don’t complain if you ignore this issue. We shall act accordingly if needed.”

The group's pamphlets were also found on the Quetta-Karachi national highway and some buildings. Wadh is home to more than 300 Hindus and has 45 shops belonging to the Hindu community.

Fear has gripped Hindu families since May 31 when an unidentified motorcycle shot Ashok Kumar dead as he opened his uncle's shop in Wadh.

“This is open terrorism. The state has failed in protecting minorities. We strongly condemn the killing of the Hindu trader and demand the arrest of his murderers,” said Asim Kazim Ronjho, district general secretary of the BNP in Lasbela.

Last month Pakistani social media users paid tribute to Charanjeet Singh, marking the third anniversary of the death of the veteran Sikh peace activist shot dead by unidentified armed men in his grocery store in Peshawar, capital of Khyber Pakhtunkhwa province. According to police, Singh was killed for failing to pay extortion money.