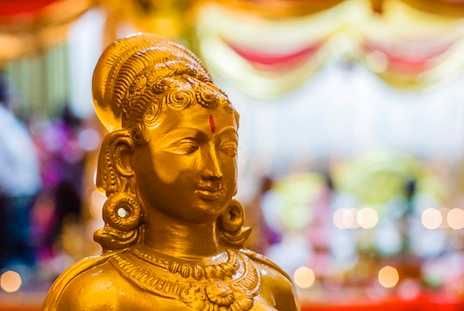 India’s Hindu temples are resisting divulging their gold holdings – perhaps nearly half the amount held in Fort Knox – amid mistrust of the motives of authorities who are trying to cut a hefty import bill that is hurting the economy.

The central bank, which has already taken steps that have slowed to a trickle the incoming supplies that have exacerbated India’s current account deficit, has sent letters to some of the country’s richest temples asking for details of their gold.

It says the inquiries are simply data collection, but Hindu groups are up in arms.

“The gold stored in temples was contributed by devotees over thousands of years and we will not allow anyone to usurp it,” said V Mohanan, secretary of the Hindu nationalist Vishwa Hindu Parishad organization in Kerala state, in a statement.

Indians buy as much as 2.3 tonnes of gold, on average, every day – the weight of a small elephant – and what they don’t give to the gods is mostly hoarded. Jewelry is handed down as heirlooms and stored away with bars and coins as a hedge against inflation or a source of quick funds in an emergency.

That is costing the economy dear. Gold imports totaled $54 billion in the year ending March 31, 2013, the biggest non-essential item shipped in from overseas and a major factor in swelling the current account deficit to a record in 2012/13.

Guruvayur temple, in Kerala, one of the most sacred in India and boasting a 33.5-metre (110-ft) gold-plated flagstaff, has already told the Reserve Bank of India (RBI) it won’t divulge any details.