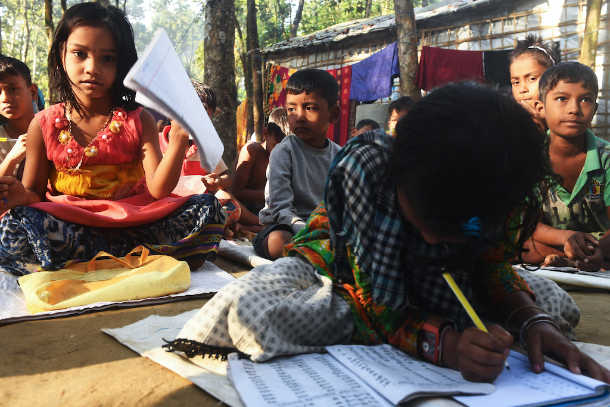 Hindu refugees in Bangladesh are dismayed over a delay to their repatriation to their homes in Myanmar's Rakhine State.

Ni Maw, a Hindu community leader in Maungdaw, northern Rakhine, said about 440 Hindus want to return to Rakhine as they feel Myanmar is their home.

"Our Hindu community has no problem with other religions such as Muslims or Buddhists, so Hindu refugees want to live in harmony in Rakhine after returning to their homes," Ni Maw told ucanews.com.

He said Hindu refugees were disappointed that repatriation has been delayed to next year.

"I have no idea when they [Hindu refugees] will be able to come back as it totally depends on both the governments of Bangladesh and Myanmar," Ni Maw said.

Hla Tun, a Hindu community leader in Yangon, said it appears that Bangladesh does not want to include Hindu refugees in the first batch of repatriations as it wants to focus on Rohingya Muslim refugees initially.

"Our Hindu community is a minority group in Myanmar and we feel we are neglected as the world pays much attention to the Rohingya despite the Hindu community bearing the brunt of violence and attacks in Rakhine in August 2017," Hla Tun told ucanews.com.

The Hindu leader, who visited refugee camps in Bangladesh in April with government officials, said Hindu refugees are excited about repatriation.

"Myanmar's government is ready to accept all refugees and sent a list of verified people, but the repatriation delay is the responsibility of Bangladesh's government," Hla Tun said.

Myanmar officials who visited refugee camps in Bangladesh last month said they met with Hindu refugees who are willing to come back to northern Rakhine.

Both governments agreed to repatriate the first batch of 2,251 refugees on Nov. 15 but the plan has been stalled amid opposition and safety concerns from Rohingya refugees, rights groups and aid agencies.

At least 3,000 of an estimated 8,000 Hindus living in Maungdaw, Buthidaung and Sittwe fled during the exodus of Muslim Rohingya during clearance operations by the Myanmar military in August 2017. Some were internally displaced while others crossed over to neighboring Bangladesh.

More than 700,000 Rohingya fled to Bangladesh to escape the brutal military crackdown in Rakhine in response to Muslim militant attacks on security posts on Aug. 25, 2017.

The violence affected thousands of Hindus. Myanmar's military reportedly found two mass graves with 45 bodies of Hindus in Rakhine and blamed the killings on militants from the Arakan Rohingya Salvation Army (ARSA).

On May 22, Amnesty International published a report that ARSA killed 53 members of the Hindu community in Kha Maung Seik village and another 46 Hindus from Ye Bauk Kyar village in August 2017.