Jharkhand's Bharatiya Janata Party (BJP) chief Ravindra Rai addressing a meeting in state capital Ranchi on March 29. The party is pushing for a law against conversion in the state, where BJP is in power. (Photo by IANS)

The ruling pro-Hindu party in eastern India's majority-tribal Jharkhand state has pushed for an anti-conversion law that church leaders fear will be used to intensify the harassment of local Christians.

The two-day state-level executive meeting of the Bharatiya Janata Party's (BJP), that concluded May 1 in Palamu, adopted a resolution proposing a law to end religious conversion activities in the state.

"The resolution asks the state government to formulate a law that will make all conversions done through allurement or force illegal and punishable," J.B. Dubit, the state's BJP spokesperson, told ucanews.com May 2.

The BJP and other Hindu groups maintain that Christian missionaries' service in the fields of education and health are a cover to attract poor tribal and Dalit people in the villages.

"We are not against religious conversion per se, but it is not acceptable to take advantage of someone's poverty, or other such issues, by coercing them to switch religions," Dubit said.

However, he did not identify any specific religious groups or provide data to support such claims.

The Indian Constitution "provides all citizens the freedom to practice and propagate the religion of their choice without any interference from anybody, including the government," Auxiliary Bishop Telesphore Billung of Ranchi, based in the state capital, told ucanews.com.

"We Christians do not convert anyone through allurement or force but allow those who want to join the community of their own accord," he said.

Bishop Billung said that the BJP was pushing its agenda of turning India into a theocratic Hindu state, using all resources at its disposal.  "The party has used the media to carry false news of conversion from Hinduism and reconversion to Hinduism to prepare the ground for an anti-conversion law," he said.

The state, under BJP rule since 2014, has witnessed a series of anti-Christian activities including Hindu hardliners banning Christian prayers and the entry of pastors in villages. Many Dalit and tribal leaders allege that their communities are threatened with violence to dissuade them from becoming Christians. 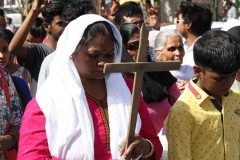 Bishop Vincent Barwa of Simdega who is based in the state and is chairman of the Indian bishops' Committee for Tribal Affairs, told ucanews.com that the push for this law confirms that the BJP is playing a "game to divert the attention of people from real issues" of poverty and misrule.

Jharkhand has some 9 million tribal people, who form 26 percent of state's population of 33 million. About 1.5 million people in the state are Christians, at least half of whom are Catholics, almost all of them tribal.

The state's almost 5 percent Christian population is much above the national average of 2.3 percent.

Several Indian states such as Chhattisgarh, Gujarat, Madhya Pradesh, Odisha carry laws that restrict religious conversion, making it a punishable offence to convert without the prior permission of local government authorities.