Nobody can convert a person to any other religion, especially to Catholicism, says Bishop Binay Kandulna of Khuti 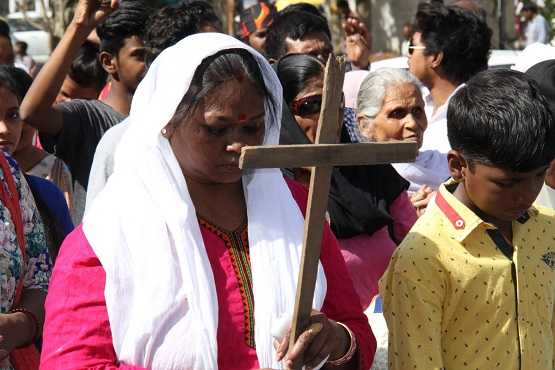 A Catholic woman prays as she joins a Palm Sunday procession on April 9 in New Delhi. Hindu groups in the country have publicly announced their decision to create Christian-free areas in Jharkhand state. (ucanews.com photo)

Hindu nationalists claimed to have converted more than 52 Christian families in an attempt to create Christian-free areas in India's Jharkhand state.

Local media reported that the Rashtriya Swayamsevak Sangh (RSS), a coalition of groups working to make India a Hindu theocratic state, made the conversions in Khunti district.

"It is a matter of concern. But we are not threatened as we don't believe in the forced conversion of people," Bishop Binay Kandulna of Khuti, reacting to the report.

The state, ruled by Bharatiya Janata Party (BJP), considered the political wing of the RSS, has witnessed a series of violent actions against Christians, including beatings and bannings of pastoral activities and prayer services.

RSS official Laxman Singh Munda, who is also deputy president of the BJP in Khunti district, told media that Christian missionaries have been luring tribal people to their religion over several decades in the garb of social service.

He said the campaign to return tribal Christians into the Hindu fold will continue throughout April.

"You cannot call it conversion. We are only bringing our lost brothers and sisters back to their religion," he told the media. "We want a Christianity-free block [and] the villagers will soon return to their roots," he said.

Khuti is considered a Christian-stronghold district as some 25 percent of its 532,000 people are Christians. Hindus form another 25 percent while the rest follow the tribal Sarna religion. The district's demography contrasts with the national scenario where Christians only number 2.3 percent and Hindus make up 80 percent of India's 1.2 billion people.

Jharkhand has some 9 million tribal people, who form 26 percent of the state's 33 million population. About 1.5 million people in the state are Christians, at least half of them Catholics, almost all of them tribal.

Bishop Kandulna said that "first of all" the Hindu group's claim that Christians used allurement to convert tribal people is "not true. The church does not believe or support forced conversion," he said.

The bishop, from the Oraon tribe, also doubted the claims of the group. "Nobody can convert a person to any other religion, especially to Catholicism, using force as they are very strong in their faith. Unless one is ready mentally and spiritually, it is not possible" the prelate said.

However, local media reports said in the first week of April at least seven Christian families underwent a ceremony in a village. Called a "purification ceremony" Hindu priests smear sandalwood paste on the foreheads of the Christians and wash their feet symbolizing their return to the Hindu community.

Gladson Dungdung, a tribal activist in the state said the claims, whether right or wrong, "is a matter of concern because it can provoke larger movements for Christian-free areas within the state and elsewhere creating division among people, especially among tribal people in the name of religion."

The BJP state government "does not want tribal people to excel in their socio-cultural lives. Their only aim is to divide the tribal people in the name of religion and creed," he added.

Mukti Prakash Tirkey, editor of a weekly on tribal affairs published in New Delhi, said the government's tactic "is very clear and their political agenda was to loot the tribal people's land and resources in the name of development."

"It is unfortunate that poor tribal people don't understand the hidden agenda of the pro-Hindu BJP government in the state which wants to destroy the basic rights of the people," said Tirkey.

Opposition parties and tribal rights activists said the highly contentious amendments got the legislative nod have paved the way for the state's largely poor tribal people to lose their small land holdings to industrial, commercial and welfare projects. 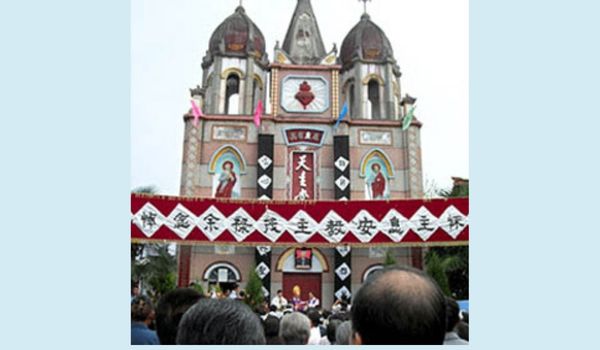