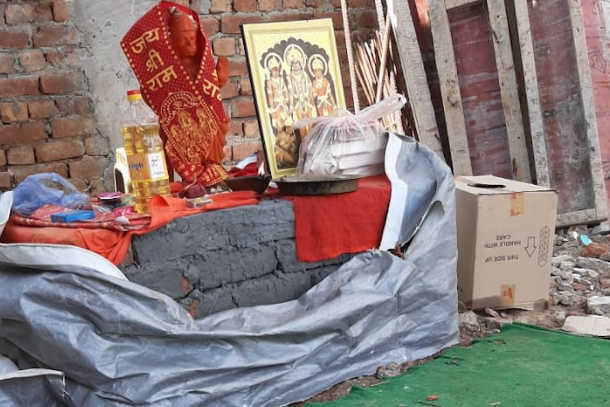 A statue of the monkey-headed Hindu god that Hindu militants installed inside an under-construction Protestant church in Faridabad town of Haryana state on June 21. (Photo supplied)

Christian leaders have sought action against Hindu activists who forcefully installed a Hindu idol inside an under-construction Protestant church in Haryana state.

The activists of an unnamed Hindu group also claimed that a Hindu temple existed there while installing the idol on June 21 in Faridabad.

The Hindus continue to offer daily prayers before the monkey-headed Hindu god, according to church officials.

"They have neither moved the idol nor vacated the church property even after four days," Minakshi Singh, general secretary of Unity in Christ, a forum of Protestant churches, told UCA News on June 25, a day after she visited the place.

The pro-Hindu Bharatiya Janata Party (BJP) runs the state government in Haryana. The BJP faces criticism for supporting Hindu moves against Christians and Muslims in their bid to make India a Hindu-only nation.

Singh said she and other church leaders complained to Faridabad's police chief on June 23 after a local police officer had refused to act on their complaint. The officer had sought two days to settle the issue, she said.

But the "intruders continue even now," she said, accusing the police of supporting the Hindu activists. "We are going to initiate further legal action if the police fail to clear the property," Singh said.

The church property belongs to the Assembly of God, a Protestant denomination active in northern India.

"The renovation of the church was going on when the extremists pulled down the under-construction wall and gate of the church" and installed the idol and manhandled the pastors, according to Pastor Ivan Power, head of the Assembly of God in northern India.

Pastor Power called on the government to restore the church's property to its original owners.

Although Hindu activists claimed the land belonged to a temple, they failed to produce any documents to substantiate the claim.

The Protestant group holds documents of ownership to the land. "But despite that, the police have not taken any step to establish our legal right to the land, remove the idol and initiate action against the lawbreakers," Singh said.

Pastor Uday Pillai, the associate pastor of the attacked church, told UCA News on June 25 that violence aims to support the government's move to introduce an anti-conversion law in the state.

"The motive is to prepare the ground for a proposed anti-conversion law in the state," he told UCA News.

He said they bought the land 15 years ago from its previous owner who lived there for 47 years. "There was no record of any temple … and nobody has seen any temple there," he said.

Pastor Pallai also said violence against Christians is normal in Haryana and most cases go unreported.

As part of its services, the church offers tuition to 210 poor slum children from grade 1 to 5.

Chief Minister Manohar Lal Khattar recently said cases of forced conversions have been increasing in Haryana, and the law against conversion has to be passed "so that strict action could be initiated against the accused."

Hindu groups claim Christian services such as education and health care among the poor are a façade to attract them toward Christianity.