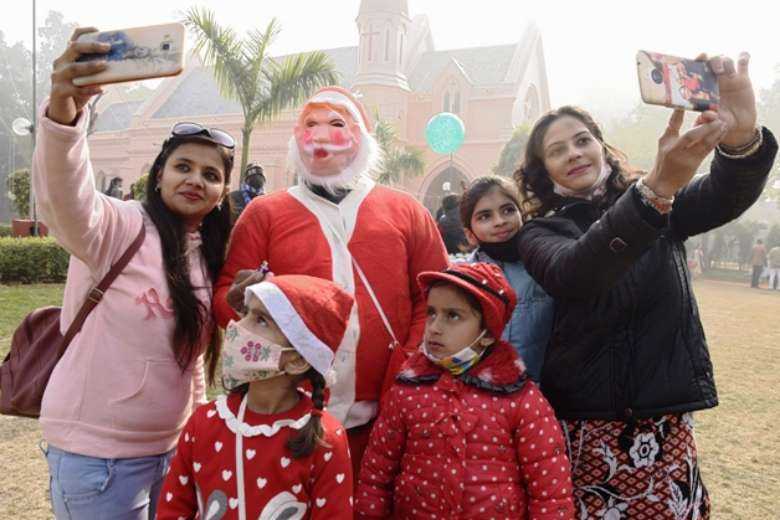 Christian devotees take selfies with a man dressed as Santa Claus on Christmas Day at a church in Amritsar, India, in 2020. (Photo: AFP)

Indian Christians have been told in as many words to mind their own business and stop converting people from other religions to their faith.

The message was conveyed at a pre-Christmas gathering in capital New Delhi on Dec. 16 by Indresh Kumar, a senior leader of the Rashtriya Swayamsevak Sangh (RSS), the mothership of pro-Hindu organizations including India’s ruling Bharatiya Janata Party (BJP).

The gathering held at Nagaland House, a popular venue for Christmas gatherings, was billed by the RSS as an “outreach effort” with tribal people from the Christian-dominated northeastern state of Nagaland.

It was attended by some 300 people including federal minister R.K. Singh, RSS and BJP leaders and foreign diplomats from the US, Russia, Syria and Korea.

Kumar, who spoke in the native Hindi language, said the greatest message of Christmas was peace, brotherhood, love and tolerance. “Respect all, follow your own [religion], there is no need of violence, no need of conversion,” he added.

Kumar said if one respected all religions, then there was no need for conversion. “If we follow this path, then we can avoid big problems,” he said.

We will have to ensure no one leaves the Hindu religion. Those who have left will be brought back to our family

“Conversion causes differences. It causes hatred, it creates conflict ... so if we want to make the world conflict-free, there is a need to respect all religions.”

The RSS leaders further emphasized that religious freedom is not the freedom to interfere in or criticize other people’s religion.

Kumar reiterated that there was “no bar” on following one’s own religion. But when there’s criticism of and interference in other people’s religion, conflicts are bound to happen.

The event was organized by the Bharatiya Christian Manch (Indian Christian Forum) floated by the RSS a couple of years ago purportedly to “deepen harmony and understanding” and “have wider relationships” with the minority community.

Kumar’s plain talk came within a day of RSS chief Mohan Bhagwat’s clarion call to Hindus for propagation and protection of Hindu culture and values along with bringing back to the Hindu fold all those who had converted to other religions.

Bhagwat was speaking at the inaugural session of a three-day-long Hindu Ekta Mahakumbh on the theme of uniting all Hindus at Chitrakoot in the central state of Madhya Pradesh on Dec. 15.

“Keep making efforts to bring people who had left Hinduism and ensure that they can rejoin the Sanatan Dharma. The fear could not hold you back for long. We will have to ensure no one leaves the Hindu religion. Those who have left will be brought back to our family,” the Hindustan Times reported him as exhorting the participants.

A.C. Michael, a former member of Delhi Minorities Commission, said the words and actions of leaders like Kumar do not match.

Faith is an individual’s choice. Those accusing Christians of using fraudulent means to convert are denigrating people's intelligence

“The Hindu leaders should stop their own activists from interfering in matters of other religions,” he said in an oblique reference to the repeated attacks on Christian institutions including places of worship across the country in recent months.

Christians found themselves especially vulnerable in BJP-ruled states like Gujarat in western India, where authorities have launched police investigations into the affairs of an orphanage run by the Missionaries of Charity, accusing them of attempting to convert the inmates.

Research including by Pew Research Center has shown that religious conversions have had no social or demographic impact on India’s religious composition.