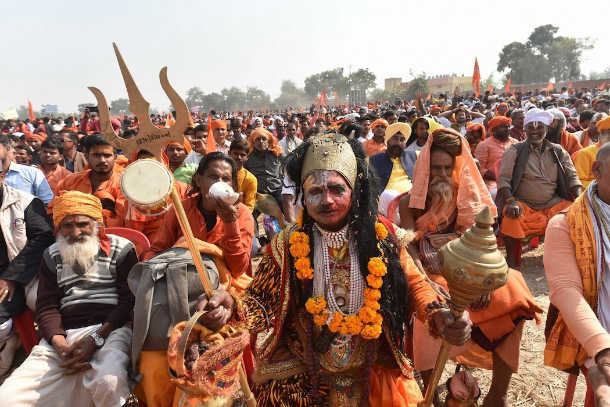 Sadhus and monks were part of a dharma sabha (religious meeting) in Ayodhya in the Indian state of Uttar Pradesh on Nov. 25. They gathered to revive a decade-old demand to build a temple on land that once had a Muslim mosque. Hindu hardliners destroyed the mosque in 1992. (Photo by IANS)

Tens of thousands of Hindus gathered in the northern Indian city of Ayodhya on Nov. 26 to demand a Hindu temple be built where a mosque once stood before it was demolished by Hindu hardliners more than two decades ago.

An estimated 200,000 Hindus gathered in the city for a dharam sabha (religious meeting) to pressure Prime Minister Narendra Modi and his pro-Hindu Bharatiya Janata Party-led government to build a Ram temple at the site of the 16th century Babri mosque which Hindu hardliners destroyed on Dec. 6, 1992.

A temple cannot be built as a dispute between Muslims and Hindus over who controls the land continues in the courts.

Hindu groups say they have proposed designs for a temple and are ready to build a temple.

"We will not sit in ease until temple construction is achieved," said Krishna Gopal, a leader of Hindu umbrella organization RSS (Rashtriya Swayamsevak Sangh) who chaired the meeting.

Hindus consider Ayodhya in Uttar Pradesh state the birthplace of Hindu lord Ram. They claim Mughal ruler Babar demolished a Ram temple and built over it with the mosque. Hard-line Hindu groups stress the land originally belonged to them.

Before the large numbers arrived on Nov. 26, hundreds of Muslims fled the city fearing violence as the anniversary of the demolition was barely a week away.

The BJP has been accused of engineering the 1992 demolition and its action is seen as helping push the BJP to political prominence and eventually take power in Delhi.

The BJP said the mosque was an insult to Hindu self-esteem and its past party slogans said only a Ram temple at the place of mosque could help revive Hindu pride.

In the past six general elections since the demolition, the BJP promised a Ram temple would be built in Ayodhya but failed to deliver.

Critics say the Hindu party has been using the emotive issue purely to garner votes.

"The RSS-BJP is trying to set the country on fire by raking the temple issue. At a time when people need jobs, food and economic well-being, it is a huge distraction from the failures being created by the BJP," Marxist leader Sitaram Yechury told the media.

Another prominent opposition leader, Akhilesh Yadav of the socialist Samajwadi Party, said the BJP is attempting to divert people's attention from the Modi government's "big-time failures."

Haque gave the example of how opposition parties and Muslim groups used to observe protest meetings on the anniversary of the Babri mosque demolition.

"A few years ago, the Congress party started playing their vanilla secularism and ordered that no such protest should be held," he said.

"Muslims are no longer wanted in this country. Everyone is after Hindu votes, so the temple movement is back."