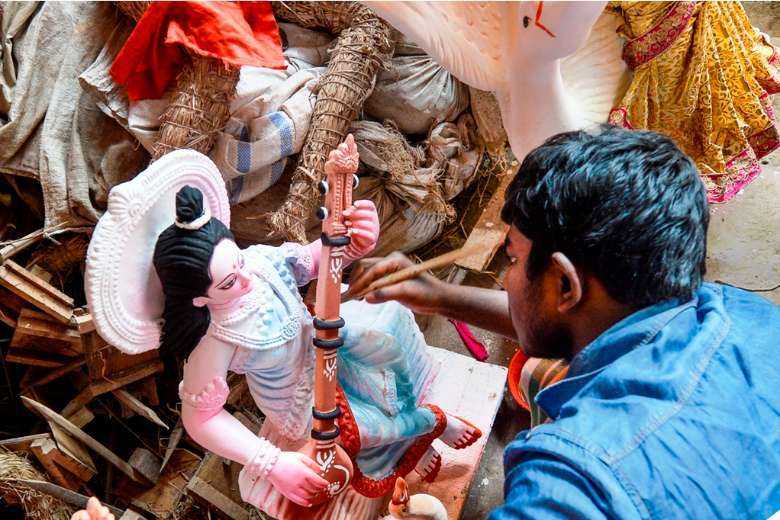 An artist gives final touches to an idol of goddess Saraswati ahead of the Hindu puja festival in Dhaka, Bangladesh, on Jan. 28, 2020. (Photo: AFP)

A Catholic diocese in central India has sought police protection for its school after a Hindu group demanded that a statue of the goddess Saraswati be installed on its campus.

A delegation of the VHP (Vishwa Hindu Parishad or World Hindu Council) handed over a memorandum to Father Augustine Chittuparambil, manager of Christ Jyoti Senior Secondary School in Satna Diocese in Madhya Pradesh, demanding that the statue be installed within 15 days.

The memorandum states that a statue of Saraswati, considered the goddess of knowledge in the Hindu pantheon, was removed from the school campus. It contained a threat to take action if the school management failed to reinstall it.

The school management, however, denied the claim. “It is a 49-year-old school and no statue of goddess Saraswati was on the school campus at all,” it said.

Sagar Gupta, regional assistant secretary of VHP, told UCA News on Oct. 26 that “the statue of goddess Saraswati was on the school campus until three years back and only now they got to know about it missing.”

“We have no problems with the school management but want the statue to be installed,” he said while adding that “if the school failed to install it we will install it.”

Through such false campaigns, they systematically cause hatred towards Christians, especially those working among common people. It is a very dangerous trend

The VHP wants the Catholic school to follow the practice of offering prayers to goddess Saraswati as more than 99 percent of the students are Hindu, Gupta explained.

Father Chittuparambil, who is also the vicar general of the diocese, said the VHP activists were trying to incite communal discord as no such statue existed on the school campus as alleged by them.

“Since they have officially notified us about their plans to hold an agitation, we will inform the district collector and superintendent of police seeking protection for our school,” he told UCA News on Oct. 26.

More than 3,000 students study at the school where admissions are much sought after due to the quality of education.

Madhya Pradesh in central India has in recent years witnessed an increase in incidents of threats and targeted violence against Christians. The VHP and other Hindu groups have stepped up campaigns against missionaries working among indigenous people, especially in Jhabua, Satna and Balaghat districts.

In September, it even threatened to demolish "illegal" churches built on tribal people’s land in Jhabua Diocese.

“The open threats to our schools and churches seem to be a strategy of the Hindu group to test us,” Father Maria Stephen, public relations officer of the Catholic Church in the state, told UCA News on Oct. 26.

“Through such false campaigns, they systematically cause hatred towards Christians, especially those working among common people. It is a very dangerous trend,” he said.

Madhya Pradesh, one of the first states in India to enact an anti-conversion law in 1986, has used the law to harass minorities, said Father Stephen.

Christians account for less than one percent of the state's population of more than 70 million, much below the national average of 2.3 percent of India’s 1.3 billion people.