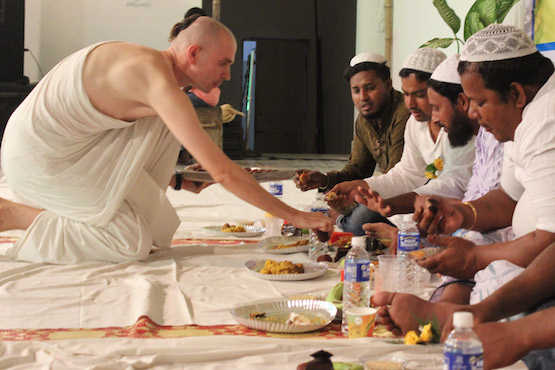 A monk from the International Society for Krishna Consciousness offers sweetmeats to Muslims during Iftar at the Hindu group's temple in Mayapur on 22 June. (Photo by Raghu Nath)

Inside a sprawling carpeted room within the temple complex of the International Society for Krishna Consciousness (ISKCON), some 165 Muslim villagers sat patiently on their chairs. Hindu volunteers of the temple busied themselves setting tables for them.

Plates laden with fruit, snacks and sweet meats, and glasses full of fruit juice and sherbets were kept ready. As prayer leader Saiful Islam signaled the end of the day's Ramadan fasting period, Muslims picked up dates to break fast.

At the conclusion of Iftar, the evening meal when Muslims end their daily Ramadan fast, the Muslims also offered their evening prayers inside the temple complex of Chandroday Mandir, Mayapur, some 130 kilometers north of Kolkata.

The gesture of the group, commonly known as the Hare Krishna movement, was "a surprise" to local Muslims and "touched their hearts," Saiful Islam said.

"We have never heard of any such Iftars being hosted by non-Muslim religious bodies around us in the past," Islam told ucanews.com.

"The response from Muslims in neighboring villages was so overwhelming that more than 160 turned up at the temple, while temple authorities only expected 75 people," Islam said.

Muslim businessman Mohammad Reazul Sheikh said the gesture was significant because it was unheard of in the religiously sensitive area of eastern India.

"Sometimes non-Muslims send Iftar meals to the houses of some Muslim friends, neighbors and mosques," but they don't host Iftars in the manner that the International Society for Krishna Consciousness did, Sheikh said.

The fact the ISKCON hosted the Iftar right inside their temple complex "meant they did everything from the bottom of their heart and they view Muslims as their brothers," Sheikh said.

Madhab Gouranga Das, the public relations officer of the Hindu group, said the Iftar was organized as part of celebration of the International Society for Krishna Consciousness' 50th anniversary.

In 50 years the group, headquartered in Mayapur complex, has established some 550 centers across the globe. The Mayapur temple has a long and close relationship with Muslims in their neighborhood.

While Muslims are not allowed to enter the areas of many Hindu temples in India, the local Muslim community has free access to the ISKCON temple and most of its rituals. However, this was first time the temple hosted an Iftar party for Muslims, Das said.

"Many local Muslims are involved with our day to day activities in the temple. They supply materials required in our temple rituals. We employ them for construction and many other works in which they are experts. They are our neighbors, our brothers," Das said.

"We wanted to offer a special treat to our Muslim neighbors during our celebration of our 50th anniversary. There could be nothing better than hosting an Iftar party for them in a gesture of goodwill," he said.

Ayodhya witnessed one of the worst Hindu-Muslim riots in recent history after a Hindu mob destroyed a 16th-century mosque in 1992. Some Hindus believed Muslim invaders had built the mosque on the birthplace of the mythical Hindu god-king Rama. The riots that followed claimed at least 2,000 lives across India.

"Such an Iftar party hosted by a Hindu temple for Muslims aims to foster a universal brotherhood, which the society badly needs today," Shastri, a peace activist, told ucanews.com.

The chief priest of Sarayukunj Ramjanaki temple expressed his hope that more Hindu temples across the country will emulate the International Society for Krishna Consciousness' gesture and organize "interfaith programs that can help breed communal harmony in the society."

Prasenjit Biswas, a professor of philosophy at Shillong's North Eastern Hill University, said he views ISKCON's Iftar party as proof "that God is one."

It is part of the International Society for Krishna Consciousness philosophy to "include all, even the lowest of the low" and for the "apparent divide between faith, worship and systems of religion to be overcome if there is a will to embrace the other," Professor Biswas said.

Muslims all over the world have begun their holy month of Ramadan on June 6 in which they abstain from all food and drink from dawn till dusk for 29 to 30 days.