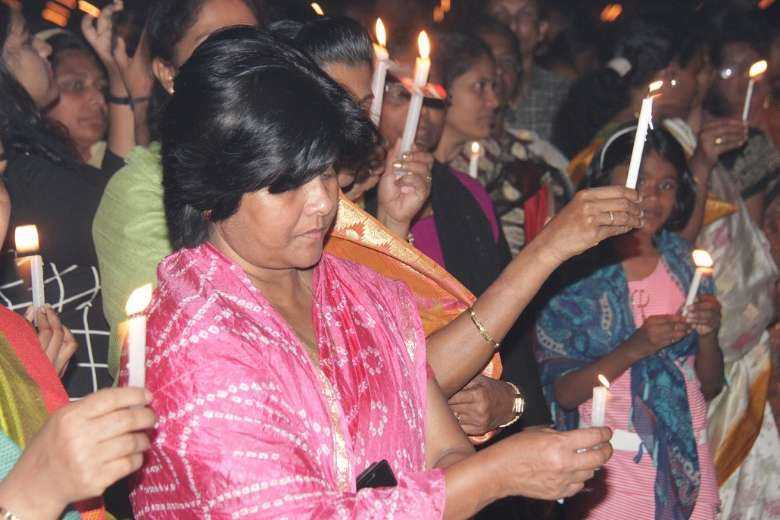 Catholics from the Syro-Malabar-Church, one of the three rites that comprise the Indian Church, observe Lent at St. Mary’s School in East Delhi in April 2018. (Photo: Bijay Kumar Minj/UCA News)

An under-construction Protestant church in the southern Indian state of Telangana was demolished by a mob of radical Hindus on Jan. 20.

“Local Christians believe that the main reason for the attack is that there are around 80 churches of different denominations in a radius of 10 kilometers, which the Bajrang Dal [a radical Hindu group] could not accept,” Pastor Levi of the Power of Jesus Fellowship, a Protestant church, told UCA News.

“The local administration has stationed some police officers at the church attack site and it is under investigation. The church is very small with about 100 members.

“A Muslim named Muhammad Afzal, who converted to Christianity and who is now known as Pastor Muhammad Afzal Paul, takes care of the attacked church. Christians are terrified but believe that the investigation will have no impact as most probably the officials will ask both parties to compromise.

“The majority of people in Mahabubabad are Hindus. There is a chance that the issue will go in their favor but we have full faith in the system and believe the truth will come out.”

However, Pastor Samuel of Maranatha Prarthana Mandiram, another Protestant church, said these incidents are occasionally reported in the media and attacks on the church are suspected land disputes. “Some vested interest people want to sort out a land dispute and take the law into their hands,” he added.

Meanwhile, according to a report by International Christian Concern (ICC), a Hindu group attacked volunteers who were helping to build the church and broke down the pillars and walls, claiming the church was too close to a Hindu temple.

Pastor Paul told ICC that the destruction of the church shattered a decades-long dream of the Christian community.

“We are a peace-loving people and we are shocked that we are targeted as we never interfere with the work of other faith communities. We have waited for nearly 22 years to build a church in Mahabubabad but this attack has shattered me and my church,” he said.

Meanwhile, a delegation of local pastors met with police to report the attack and the police promised to investigate the matter and arrest those responsible as soon as possible.

Christians are a minority in Telangana, accounting for an estimated 1.2 million out of a population of 35 million. Most Christians come from the marginalized Dalit community, while Catholics constitute roughly half of all Christians in the state.