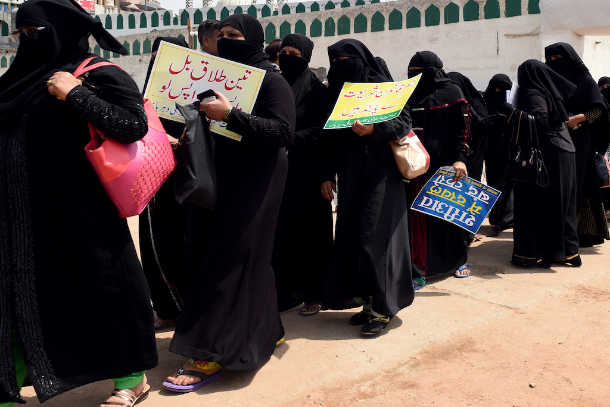 Indian Muslim women protest the triple talaq bill in New Delhi on April 4. The government has been accused of appeasing Hindus by introducing an emergency law to ban instant divorce among Muslims. (Photo by Money Sharma/AFP)

India's government has been accused of placating the Hindu majority ahead of a national election by introducing an emergency law banning verbal divorce among Muslims.

President Ram Nath Kovind on Sept. 19 gave assent to an ordinance banning the practice that allows a man to divorce his wife by saying talaq (divorce) three times in succession.

The ordinance, which needs to be ratified in parliament, comes after several attempts by Prime Minister Narendra Modi's pro-Hindu Bharatiya Janata Party (BJP) to enact a law purportedly to help Muslim women suffering because of the centuries-long triple talaq practice.

"The sole objective is to appease the Hindu vote bank ahead of the 2019 national election," said Molvi Javaid Ahmad, a Muslim scholar in Jammu and Kashmir state. "The move is direct interference in Muslims' religious affairs. It is a vindictive approach."

Ahmad said the move gives the impression that the government can act tough against Muslims without caring for their votes. It helps consolidate Hindu votes in a religiously polarized election, he added.

However, BJP leader and federal Law Minister Ravi Shankar Prasad told media that there was an "overpowering urgency and a compelling necessity" to bring in the ordinance as verbal divorce continued unabated despite the Supreme Court banning it in August 2017 as "unconstitutional."

The BJP that come to power in 2014 initiated a bill to ban verbal divorce but several opposition parties opposed it. The BJP said parties opposing the bill were afraid of losing votes from India's 172 million Muslims.

However, Lok Sabha, the Indian parliament's lower house, passed the bill on Dec. 28 last year, but Rajya Sabha, the upper house, kept it pending greater consensus and debate over the issue.

Qasim Rasool Ilyas, of the All India Muslim Personal Law Board, believes the government rushed the law without waiting for more debate to divert attention from the real issues facing the country such as inflation and unemployment.

"The way triple talaq has been criminalized makes it necessary to approach the court. We will soon decide how to do it," he said.

Ghulam Ali Gulzar, a prominent Muslim scholar and writer, told ucanews.com that the ordinance stipulates a jail term for a husband who uses verbal divorce.

"If the husband is in jail, who will take care of the divorced wife and the children? This is nothing but a vendetta which looms large against the community in the country," Gulzar said.

Joseph Dias, a Catholic leader in Mumbai, told ucanews.com that the move is "nothing but a preparation for the 2019 elections."

He questioned the government's concern for the suffering of divorced Muslim women and said similar customs exist in other religions in India.

"If the law was for all who divorce their wives in such a fashion, then we could have termed it secular. It is sheer discrimination against Muslims," Dias added.