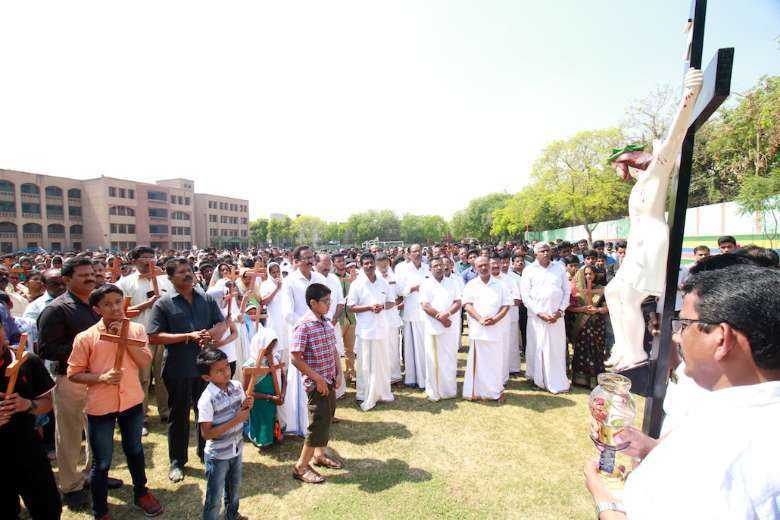 Hindu activists in the central Indian state of Chhattisgarh have disrupted a prayer service and threatened two Christian pastors in the space of three days for alleged religious conversion.

In the first incident on July 4, Pastor Firoz Bagh was conducting a prayer service at his house in Raipur, the state capital, when 30-40 Hindus surrounded the house and started shouting anti-Christian slogans.

Police took the pastor into custody but released him after a few hours after the intervention of church leaders.

On July 7, Pastor Ramesh Manikpur of Sarora Gogaon was resting at his house in the evening when a Hindu group wrote a slogan hailing Hindu gods on his boundary wall.

“They accused me of religious conversion and even slapped my son. They were around 100 and passing through our lane in a religious procession,” Pastor Manikpur told UCA News.

Pastor Moses Logan, president of the Chhattisgarh State Christian Welfare Society, told UCA News that they had faced similar situations in the state but things were brought under control after the intervention of the administration.

“It is matter of concern and worry for us as some fanatic group members take us for granted and don’t even hesitate to harass and attack us in the name of religious conversion, which is not true,” he said.

“I spoke with Pastor Bagh and he said he has to visit the police station every other day for the investigation. He is very much worried for his family and his faithful. I hope the investigation is over soon.”

Pastor Logan said Pastor Bagh told him that after police took him to the police station, a mob even surrounded the police station and started shouting anti-Christian slogans and accusing him of forced conversions.

“The mob say they will not allow him to conduct any prayer service in the area in near future,” Pastor Logan said.

Pastor Bagh told Asia News that he has been in the ministry for 20 years with the St. Thomas Evangelical Mission, a registered organization.

“I have preached for the last two decades in a rented room and just two years ago I bought this house. Several local people come here for prayer services as it is open to all without any discrimination,” he said.

“My church members are very frightened and feel they are being targeted by extremists.”

When the pro-Hindu Bharatiya Janata Party (BJP) was in power in the state from 2003, it enacted the Chhattisgarh Freedom of Religion (Amendment) Act, 2006, which provides that anyone who wants to convert must seek permission from the district magistrate at least 30 days in advance.

The district collector has the power to allow conversion only if threats or allurements have not been offered.

Anybody found guilty under the law is liable to imprisonment for up to three years and a fine of up to 20,000 rupees (US$270).

However, many critics say that after the BJP came to power in New Delhi in 2014, attacks on minorities have increased.