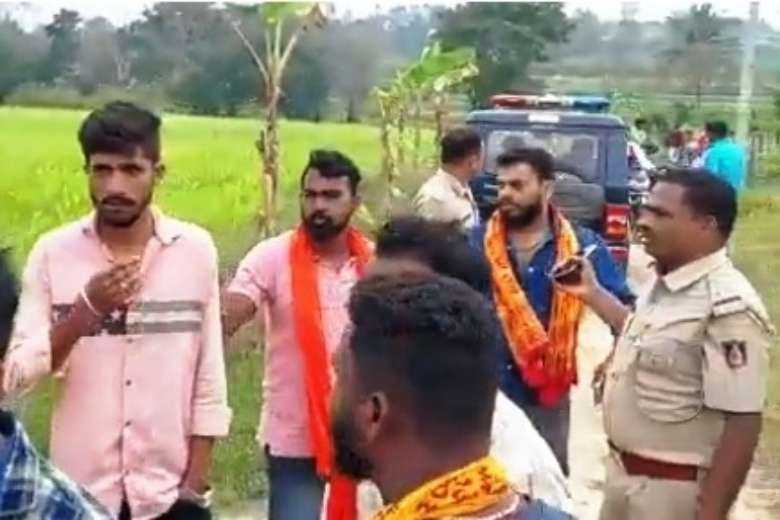 A screengrab of the Bajrang Dal mob that barged into a Christian prayer hall at Belur in Hassan district in the southern Indian state of Karnataka on Nov. 28. (Photo: Twitter)

Hindu activists in India are stepping up disruption of Sunday prayer services under the guise of exposing forced religious conversions.

Two such incidents were reported on Nov. 28. In national capital Delhi, activists of Bajrang Dal (Brigade of Hindu deity Hanuman) vandalized a newly inaugurated church in the Dwarka area.

Minakshi Singh, general secretary of Unity in Compassion, told UCA News: “The church was inaugurated on Tuesday and was holding its first Sunday service. It was started by Ankur Nirula Ministries based in Jalandhar.”

Singh alleged the police were biased against the minority community. They merely detained one of the attackers for about an hour or so and let him go after questioning.

News website The Quint quoted a police official saying: “We received information at 9.30am on Nov. 28 that a quarrel had broken out at Matiala Road and on inquiry it was found that a group of residents and local miscreants had vandalized the board that read ‘church’.”

The official said the police have registered two reports of offense, one against those who vandalized the church and another against those present inside the church for violating the Delhi Disaster Management Act guidelines.

The guidelines prohibit large gatherings in view of the ongoing Covid-19 pandemic.

The second incident was reported from the southern Indian state of Karnataka, where Bajrang Dal activists barged into a Christian prayer hall and forced the faithful out at Belur in Hassan district.

Police intervened and the situation was brought under control. A video of the incident circulating on social media showed a mob of 20 to 25 men sporting saffron scares arguing and jostling with the faithful, including women, inside the prayer hall.

Media reports said the prayer hall is run by the Life to the Nation’s Ministries. The environment of fear caused by the aggressive mob was palpable as the Sunday worshippers denied any religious conversion activities.

The Quint has reported that Karnataka’s Bharatiya Janata Party (BJP) government has launched a “massive intelligence gathering exercise” targeting Christian congregations and churches across the state.

As per the order copy, classified as “most confidential,” all churches — those built on church property and government property — and their religious heads are under the scanner, The Quint report said.

LIONEL FERNANDES
It is time for Hindu supremacists who are targeting minorities in India to realize that their Hindu confreres in the global diaspora can be similarly targeted where they are a minority and this is not a welcome prospect.
Reply