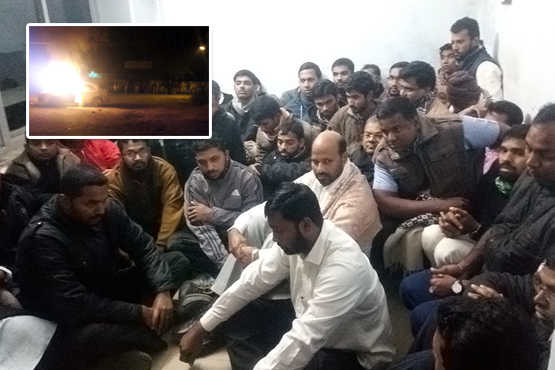 A group of seminarians and two priests inside a police station in Satna, Madhaya Pradesh, after they were detained on charges of conversion activity for singing carols in a village Dec. 14. Eight priests were assaulted and their car set alight (inset) after they went to the police station to help the detained men who were released Dec. 15. (Photos supplied)

Hindu activists have beaten eight priests and torched their vehicle outside a central Indian police station.

The assault victims had been attempting to assist 30 seminarians and two priests arrested on Dec. 14 for allegedly trying to convert non-Christians.

Trouble started when the group from St. Ephrem’s Theological College in Satna town of Madhaya Pradesh state went to a local village to sing Christmas carols.

Father George Mangalappally said that as they were singing an angry mob started shouting slogans against what they regarded as conversion activities.

"One of them called police and demanded action against us," Fr. Mangalappally said.

A police officer, on condition of anonymity, stated that after being arrested and charged the carolers were kept in 'protective custody' because of fears they would be attacked if released immediately.

Father Anish Emmanuel was among those who went to the police station to aid the carolers.

However, about 100 Hindus attacked them in the police compound, Father Emmanuel said.

"We were beaten up in front of the police, but they did nothing," he complained.

"They set our vehicle on fire, forcing us to take shelter inside the police station."

Father Maria Stephen, a spokesperson for the regional bishops' council, said this kind of attack raised serious questions about a lack of religious freedom.

The Catholics were detained on charges of violating a state law that makes it a criminal offence to attempt to convert any one using fraud, inducement or allurement.

Bishop Joseph Kodakkailil of Satna told ucanews.com that a villager had falsely claimed he was offered 5,000 rupees (US$65) to convert to Christianity.

He said missioners in the diocese had been experiencing hostility for the past two years.

Shibu Thomas, founder of Persecution Relief, an ecumenical forum that records persecutions against Christians, said the latest violence constituted the 48th attack on Christian carolers in India this Christmas season.

Overall, more than 650 attacks on minority Christians have been reported in the Hindu-majority nation so far in 2017.